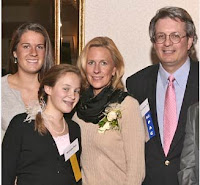 It is always just a wee bit tricky to use the word “redemption” in connection with capital punishment, because redemption is a religious category. To be redeemed means to be saved. “We are all saved in the blood of the lamb.” This means that Christ’s sacrifice on the cross has saved us from our sins. Presumably those sins may include multiple murders.

Catholics believe that sin demands expiation on the part of the sinner; penance is expiation. Protestants believe that good works are not useful in the redemptive scheme; we are redeemed by the grace of God alone.

A couple of years ago, according to state prosecutors, two petty criminals, Steven Hayes and Joshua Komisarjevsky, both on parole at the time, broke into Dr., William Petit’s house, brutalized the doctor by beating him unconscious with a baseball bat, forced his wife to go to a bank and withdraw cash, raped his wife and daughter, tied his two daughters to a bed and set his house on fire. All the members of Dr. Petit’s family save Dr. Petit himself, who managed to escape from the house, perished in the flames. Hayes and Komisarjevsky were caught by police fleeing the area in Dr. Petit’s car. They were arrested, arraigned before a court, and are now in prison awaiting trial. The state has asked for the death penalty in their case.

It is expected that four years of litigation may flow under the bridge before a verdict is rendered in the case. Appeals will follow. The last person executed in Connecticut for multiple murders was Michael Ross; it took a dozen years of litigation before he was executed, and one of the co-chairmen of Connecticut’s Judiciary Committee, Michael Lawlor, recently has stated that the death penalty cannot be executed in the state unless the convicted offender wants to die.

How does redemption as a religious category figure in all this?

Redemption, like most religious categories, has been imported into the secular realm and is sometimes confused with forgiveness.

Hayes and Komisarjevsky are not likely to find redemption through the state. Neither is the state, now pursuing the death penalty in their case, likely to forgive them; that is to say, to let the two multiple murderers go or plead to a lesser punishment without suffering the penalty that is prescribed by law as appropriate for their crimes. The state may lose their case, but that is another question.

Hayes and Komisarjevsky may receive forgiveness from the one remaining member of Dr. Petit’s family, the doctor himself, but this does not seems likely if Dr. Petit does not receive justice. And justice in the secular realm occurs when those who have broken the law receive from the state the penalty the state prescribes for breaking the law – in this case, the death penalty.

On a purely human level – as represented by pre-Christian notions of redemption and expiation – the crimes that have been imputed to Hayes and Komisarjevsky have always required a just recompense before forgiveness is extended.

Euripides, the Greek poet and playwright who more than any other may be said to have been obsessed by justice, said, “There is one thing alone that stands the brunt of life throughout its course: a quiet conscience.”

Euripides despised pious frauds such as necromancers and soothsayers: having no belief in “blind fate,” he was not above impeaching the gods themselves as making men their playthings: “Arrest the god, whose word we must obey… his is the sin, not mine,” one of his characters says. The emptiness of self forgiveness in Euripides’ plays is filled with the luminous ideas of personal integrity and the reign of universal law.