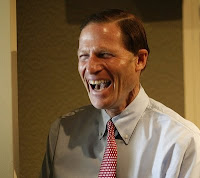 It has taken 17 months for Attorney Richard Blumenthal to discover that Lisa Moody, Governor Jodi Rell’s Svengali, is a political appointee and not a state worker, a piece of delicate information that probably could have been obtained in a two minute conversation with the employee division of state services. As a political appointee, Moody could not have violated a state law banning state employees from using state resources for political activities because – SHE IS NOT A STATE EMPLOYEE.

The Blumenthal probe took one year and four months to reach this very expensive conclusion, sufficient reason, said Republican Party chairman Chris Healy, for everyone to conclude that Blumenthal “has outlived his usefulness. The only people who benefited were the lawyers that many fine people had to hire to protect their reputations which Blumenthal and Democrats sought unsuccessfully to question. Dick Blumenthal owes us a refund.”

He forgot to mention the newspapers, which carried the Moodygate scandal for days on page one and will bury this vindication next to the obituaries.

Anonymous said…
As does Dodd.

We are getting a very poor return on our employees.
9:39 AM

Bob Swick said…
As usual another waste of taxpayers monies and he should pay back taxpayers for this useless hunt.
8:29 AM

Bob Swick said…
As usual another waste of taxpayers monies and he should pay back taxpayers for this useless hunt.
8:29 AM