Who Died and Elected This Guy Pope 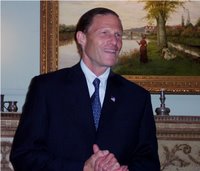 According to a Hartford Courant story, Catholic hospitals do presently offer Plan B pills to women who have been raped -- except under very narrow circumstances, when urine tests show that the victim is pregnant or ovulating. In these cases, said a representative of the hospitals, the Plan B pills "can be equivalent to an abortion and thus the proposed law would violate the hospital's religious freedom."

During his testimony at a hearing on a bill crafted to force four Catholic hospitals in Connecticut to provide Plan B pills to women who have been raped, Attorney General Richard Blumenthal said that Catholic hospitals have a contractual obligation similar to that of Wal-Mart. Recently Blumenthal bullied Wal-Mart into providing Plan B pills to their customers through the threat of sanctions. Wal-Mart, according to the story, "was required to provide all legal prescriptions to comply with its contract to participate in state health insurance plans." Blumenthal said that Catholic hospitals "which provide care to people insured by the state would have a similar obligation." Pope Blumenthal also said "the proposed law would not violate the hospitals' fundamental rights to religious freedom."

But surely there are important differences between Wal-Mart and Catholic hospitals. Wal-Mart is not a hospital. Unlike Wal-Mart, the Catholic hospitals, according to testimony given at the hearing, already administer Plan B pills. The hospitals restrict the use of the pills only when they may operate as an abortifacient, in which case their use would be clearly prohibited by the Catholic Church.

How does Blumenthal know that the use of Plan B pills, under these very restricted cases, would not violate Catholic precepts and therefore represent a denial of the freedom of religion clause in the First Amendment to the Constitution? At a minimum, the freedom of religion clause provides that the state should not make laws restricting freedom of religion. And it cannot be constitutional for the state, or its representatives, to decide on behalf of churches which religious practices shall be permitted. The pope has not died, and the attorney general has not yet been elected Pope.

If the use of Plan B pills, under the narrow exceptions observed by Catholic hospitals, is an abortifacient, and if the Catholic Church regards abortion as a sin and a crime in cannon law, then Blumenthal in his testimony seems to be proposing to force Catholics to commit a sin and a cannon law crime so that the Catholic Church may be brought into compliance with the hospitals contractual obligations to the state.

Since the legislature, Blumenthal, and several political interest groups already have involved themselves in the issue, is their anyone on planet earth who can convincingly assert that the underlying issues are not politically driven?

Since the proposed bill will deprive the hospitals and the Catholic Church from acting on their religious precepts, is there anyone on planet earth who can convincingly assert that there is no freedom of religion issue involved in this dispute?

The only person who spoke forcefully against the bill at the hearing was James Papillo, the state's Victim Advocate. After his testimony, state Lieutenant Governor Kevin Sullivan called upon Governor Jodi Rell to fire him. Sullivan quickly had second thoughts and withdrew his demand following a reprimand delivered by the governor to Papillo, who apologized for inserting religious beliefs into his testimony. How is it possible to have an honest discussion of this issue without adverting to religious beliefs?

Would Blumenthal defend the right of Victim Advocates to exersize their First Amendment rights in public testimony on bills that seek to restrict religious freedom as ardently as he has defended the state's rights to enforce private contracts?

Is there any Catholic reporter in this state -- preferably not in full rebellion against the teachings of his church -- who will obtain the answers to these and other important questions? And if that reporter is accused by his editors of smugging into his report toxic religious opinions, may he depend upon Blumenthal to assist him in exercising his First Amendment rights?

Anonymous said…
OK fine. Then the RC hospitals should not call or advertise themselves community-at-large hospitals. The laws of the community allow plan B.