The Hill and Bill Show 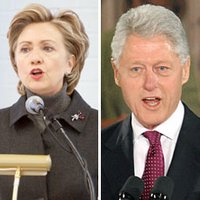 Though it’s amusing to discover that former President Bill Clinton and the present occupant of that office, George Bush, feel similarly – for different reasons – about Dubai and the United Arab Emirates, last week provided an Oops! moment for Hillary Clinton, the former president’s ambitious wife.

Mrs. Clinton wants to be president, and to this end any compromising political position Bush lumbers into is a help to her. When the roiling controversy concerning Bush’s support for Dubai – a friendly Arab country that is to administer several ports in the United States – was burbling in the press, Senator Hillary Clinton thought to distinguish herself from the president by strenuously objecting to the deal.

Sen. Clinton said the deal represented “an unacceptable risk” to national security. She was not the first to hack away at Bush, nor will she be the last. The New York Times has been in a perpetual tiff against the president, but many conservative Republicans also harried Bush on the Dubai deal.

Bush is in his twilight years as president and, as he moves towards lameduckery, it is not unusual to find his opponents and former Republican helpmates jockeying for position. Republicans are staking out their own political ground for the future. Of course, here in Connecticut, the land of the quisling Republican, virtually all the members of the state’s GOP congressional delegation have taken care to oppose the president on important issues. Former Governor John Rowland was heavily petted by Bush on several occasions, a relationship that proved fatal. For two decades and more, Connecticut Republicans quite literally have made their careers distancing themselves from their conservative brethren. Incumbents prefer that all politics should be local. The ties that bind are the ties that destroy, which is why Governor Jodi Rell will not be attending big-tent Republican functions any time soon. She saw Rowland go down with the “I Love George Bush” tattoo on his ankle and seems determined not to make the same mistake.

Hillary’s thrust at Bush was returned to her in a rather unusual way when the Financial Times discovered that her husband’s relationship with Dubai was, if possible, even more intimate than the president’s. “Hillary Clinton 'unaware' of Bill's Dubai ties” screamed the headline.

The combination of extreme wealth and a willingness to pay to play in the political game attracts lobbyist the way honey attracts bees. Many Washington lobbyists are get-rich-quick salesmen who have drifted from the political to the more lucrative private sphere; others are friends and staffers of the once high and mighty in the Washington politico-lobbying complex. Dubai, a country that meets all the necessary requirements and is, moreover, amenable to American interests, was bound to ensnare both Republican and Democrat politicians in its coils.

It was Dubai, it will be recalled, that opened its arms to Michael Jackson after he had been mauled by America’s judicial system. Mr. Jackson visited Dubai in the company of Sheikh Abdullah bin Hamed Al Khalifa, the son of the king of Bahrain, and was astonished by the beauty and civility of the small sheikhdom. Truly, a country that offers sanctuary to Jackson and money to senator Clinton's husband can't be all bad.

High priced Republican lobbyists Vin Weber and Bob Dole were involved in putting together the Dubai port deal, as was Jonathan Winer, who spent ten years as an aide to Sen. John Kerry. When Sen. Clinton, speaking to the Jewish Community Relations Council at Manhattan's 92nd Street YMCA, said that the unsavory Dubai arrangement was “emblematic of a larger problem" of ceding "some of our fiscal sovereignty,” she did not mean to direct political birdshot at Democrats, still less to shoot herself and her husband in the foot. Nor did she mean that Washington politicians had ceded their legislative sovereignty to deep pocket legal firms and their lobbyists.

When she was made aware of the embarrassing Bill Clinton/Dubai connection, the senator professed surprise, supplying the Financial Times with the following explosive lead line: “Hillary Clinton, a leading opponent of DP World's takeover of some US port operations, was this week forced to admit that she did not know her husband had advised Dubai leaders on how to handle the growing dispute.” Senator Clinton told the New York Post, the Financial Times reported, “that she was unaware her husband had been contacted by Dubai officials two weeks ago and offered them advice on the deal.”

Robert Novak reported in his column that the relationship between Hillary’s husband and the United Arab Emirate was “far from casual. The sheikdom has contributed to the Clinton Presidential Library, and brought Clinton to Dubai in 2002 and 2005 for highly paid speeches (reportedly at $300,000 apiece). He was there in 2003 to announce a scholarship program for American students traveling to Dubai.”

But this is not the first time Mrs. Clinton has expressed surprise at circumstances involving her husband, an affable man who occasionally conceals important information from his wife. There is an upside to Sen. Clinton’s wide-eyed astonishment: The lobbyists and entangled politicians appear to be losing the PR battle for the hearts and minds of voters, who may be in a throw-the-bums-out mood. And Dubai, an Arab state made up mostly of millionaires that really does appear to be pro-American, has decided to fully transfer its operations of U.S. ports to a U.S. entity.