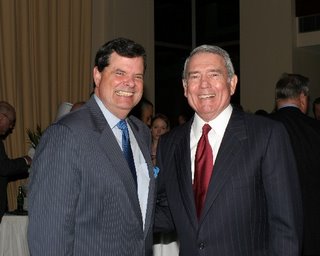 Lieutenant Governor Kevin Sullivan was celebrating Martin Luther King’s day late this year. A little more than a month out from MLK Day, he told Victim Advocate James F. Papillo, a deacon in the Roman Catholic Church, to shaddup! It appeared that Papillo, who had given testimony in a public hearing against a bill designed to force Catholic hospitals to provide Plan B to rape victims, had impermissibly crossed a largely imaginary dividing line in his testimony and wandered into treacherous religious terrain.

Sullivan said he thought Papillo had "crossed the line when he expressed his personal religious point of view" in testifying against the bill at a legislative hearing and called upon Governor Jodi Rell to fire him. Denise W. Merrill, the co-chairman of the Appropriations Committee said, "I think he did a disservice to all women who are victims of sexual assaults." And Rell remonstrated with Papillo, after which Papillo promised to stay in his religious cage. "I believe he now understands that he went far beyond the bounds of victim advocacy," Rell admonished. "Mr. Papillo knows he must not cross the line again between his personal beliefs and the interests of those for whom he advocates."

Merrill overreached a bit in her comment. In speaking against the bill, Papillo was not doing a disservice to all women who are victims of sexual assault because Catholic hospitals, as it happens, do provide Plan B to their patients who are rape victims. But the Plan B pills are not dispensed to women who are pregnant or ovulating because in those instances the pill acts as an aborticide, and the Catholic Church is (gasp!) against abortion. The bill snaking its way through the legislature would abolish these reasonable exceptions and so force Catholics to violate their religious precepts. Papillo sought to draw these distinctions in his testimony, which infuriated proponents of the bill. At one point, he characterized the bill as a solution is search of a problem and acknowledged he had received no complaints concerning the Catholic hospitals in his official capacity as Victims Advocate. Distinctions of the kind raised by Papillo, however, will not fit on bumper stickers, do not play well in political ads and usually are lost in press reports.

"Hang me or crucify me if I’m being unreasonable," Papillo said in utter frustration. "I’m just trying for balance … it’s a political hot potato. Do I become a potted plant? I can’t."

It is true that there are important differences between Papillo and Martin Luther King. Papillo is a Catholic and deacon in his church. King was an African American Baptist minister. However, there is one striking point of similarity: Both struggled against the notion that the U.S. Constitution provides an impermeable wall of separation between church and state. And both, pointedly, did not shut up.

King was more than a great political rhetorician; He was a great Christian. The turning point in King’s life – the crossing of the line, so to speak – occurred when he was alone in his kitchen after he had unfurled his Christian ideals and realized that he was a simple, poor weak man, not at all up to the task at hand.

Sullivan, to his credit, had second thoughts about asking Rell to fire Papillo and withdrew his demand. Perhaps he had read the transcript of Papillo’s testimony and found it was not a series of religious propositions such as is found in the Credo that Sullivan, as a Catholic, gives his internal assent to. Or perhaps he had stumbled upon Article 6 of the U.S. Constitution, which provides that “no religious Test shall ever be required as a Qualification to any Office or public Trust under the United States,” a provision that opened public offices to religious people of all persuasions, particularly Catholics, who at the time were the targets of vicious discrimination. Where there can be no test for admittance, there should be no bar for the profession of religious beliefs. What is the point in admitting a Catholic to office and expecting him to behave as a pagan?

The good news is that Papillo has not been fired. God works in mysterious ways.