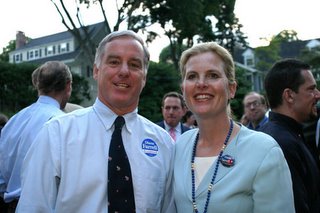 The average Democrat voter – Joe Sixpack as he is sometimes called – may be excused for his confusion this year. On the one hand, he has been asked by First Selectwoman of Westport Dianne Farrell to rally to her cause because her opponent in the race for the U.S. Senate, Chris Shays, is a war hawk; on the other hand, Farrell herself has endorsed the candidacy of current U.S. Sen. Joe Lieberman, who is -- a war hawk.

"Joe is a longtime friend,” Farrell has said, “and he has endorsed me and my campaign in the past. We'll have to agree to disagree on the war . . . but we agree on so many other issues," women's privacy rights, the Family Leave Act and fair wages among them.

Lieberman has come under fierce criticism from party activists for adopting a position on the Iraq war that seems to them supportive of President George Bush’s Mid-East policies, and yet Farrell has accepted an endorsement from the leper, hoping to escape the leprosy. Can she embrace the Lieberman without catching the dreaded disease?

Following Farrell’s endorsement, one of Lieberman’s most virulent Connecticut critics and an ardent supporter of Ned Lamont, the sacrificial lamb from Greenwich who has been persuaded to lay on the line his sacred honor and possibly part of his sizable fortune to primary Lieberman, acknowledged that “backing Joe while running on an anti-war platform against a guy who says he has the exact same position on Iraq is going to be a tough needle to thread for her.” However, both Farrell, as well as Chairman of the party Howard Dean, “didn't say that a primary challenge was bad for the party or that the Democratic opposition to Joe should sit down and shut up.”

Behind every thunderclap and lightning stroke lies the peace that passes understanding.

In the meantime, adding insult to injury, Shay's was fulsome in his praise of Lieberman during an interview in the Stamford Advocate. Soon after, rumor was set afoot that the Republicans had planned to cross-endorse Lieberman. According to a report in The Hartford Courant, Shays had contacted Governor Jodi Rell a month ago and discussed the possiblility of a cross-endorsement. Rell was "nonplussed." That rumor was hotly denied by Republican honchos, causing "Yeah, sure" grins to appear on the faces of political commentators. Some rumors cover the truth, others cover deft political strategies and others cover belly laughs. No one is certain about this one. Lieberman was cross-endorsed once before by Democrats and a Potemkin party Lowell Weicker formed to back his run for governor. At that time, Lieberman accepted the endorsement. This time, the senator has said "Thanks, but no thanks." Any endorsement by Republicans would simply demonstrate that the state party is moribund. Many Republican watchers have long suspected that it is stiff with rigor mortis.