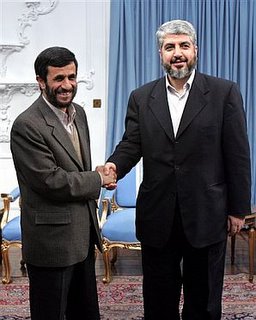 What comes after a speedy withdrawal of troops from Iraq -- a measure favored by Cindy Sheehan and zanies on the left – is the whirlwind.

There are only three options:

1) Immediate withdrawal.
2) The Bush plan: the introduction into Iraq of democracy. The Bushies think that if democracy can be transplanted to Arabia and if the tender shoot takes – a big "if" – the plant may spread to Syria and Iran. Democracy, an invasive plant, is non-aggressive, or at least less aggressive than militant Islam.
3) The ostrich option: bury your head in the sands of Arabia, cross your fingers and hope for the best.

Immediate withdrawal, al la Vietnam, leaves all our allies, overt and covert, perched on the roof, waving to the helicopters that will take them to the next safe haven. But the next haven will not be safe for long. Mahmoud Ahmadinejad, the democratically elected president of Iran, longs for the return of the Mahdi and thinks he sees his figure approaching in the smoke and ashes of Israel.

The Bush plan, according to the father of the modern conservative movement, Bill Buckley, is not working. The ostrich option provides only temporary relief. We cannot go back. All the bridges have been burned on 9/11.

So, where do we go from here?

Dodd and Lieberman at least attempted an answer to the question here.