On Bagles and Tyrants 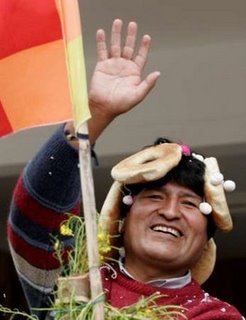 1) What are those things on Evo Morales’ head?

2) Will Fidel Castro ever die?

1) The decorative headpiece is made, in part, of bagels.

2) Like most tyrants, Castro probably will die in his bed of advanced old age. Some blame his longevity on the CIA, an organization that seems incapable of making a lethal exploding cigar.

3) Can’t answer that one. Part of it is stupidity. Part of it is traceable to the allure of socialism, a doctrine that holds that everything needful may be appropriated from the hated upper classes. That notion had its longest run in the Soviet Union, until the enterprise collapsed of its own internal contradictions at the turn of the century. President Ronald Reagan, Pope John Paul, Lech Walesa, Alexander Solzhenitsyn, and leaks in the concrete dikes surrounding the Soviet castle all conspired to end nearly a century of tyranny. Sustaining liberty involves some heavy lifting. Perhaps the exercise has exhausted the West.