Lamont, Malloy Without The Quills? 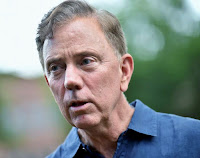 Following Governor Ned Lamont's presentation of his budget to the General Assembly, the question remains: Is Ned Lamont Malloy II? He may turn out to be Malloy without the quills

Lamont’s budget includes hefty increases in taxes; as defined here, a tax is any dollar that moves from private wallets into the public treasury. Accumulatively, Lamont’s tax extensions – they are not a revocation of tax exemptions – closely approaches the tax increases of the Malloy administration. Taxes under the Lamont administration will also be made more progressive according to the reliable Marxian formula: "From each according to his ability, to each according to his needs."

Because of past economic sleight of hand, the neediest recipient of state dollars, it turns out, is the state treasury. In the past, when expenses have gone up and revenue has plummeted, Connecticut has increased taxes to recover ensuing deficits. Lamont repeats the process in a higher key.


The Lamont administration follows the most tax prone administration in state history.  Taken together, Malloy’s two major tax increases represent the largest tax increase of any administration in state history. Those increases were attended by predictable results, one of which -- in the absence of long term, permanent cuts in spending – has been a widening gap between revenue and expenses. Malloy’s last gift to Lamont was a contractual provision that robbed Lamont of one of the principal tools used by all Connecticut governors in union contract negotiations, a no-layoff provision in a contract that does not expire until 2028.

Progressives in the state think more revenue is to be had from the wealthiest taxpayers living the life in what used to be called Connecticut’s “Gold Coast,” mostly Fairfield County.

We’ve all heard U.S. Senator Elizabeth Warren’s fulminations against the rich, and Connecticut’s General Assembly is full of progressives beating the same drum, but good luck with that in Connecticut. When a similar threat was raised in New York, the shrieks of Governor Andrew Cuomo could he heard from Albany to Manhattan. Cuomo warned his progressive compatriots that the loss of revenue could not be made up by continuing to tax at increasingly higher rates the wealthiest New Yorkers, the top 1 percent of whom already contribute 46 percent of all government revenue. “God forbid,” he said, “if the rich leave.”

They likely will not be coming to Connecticut.

The Lamontists, like Malloyalists, continue to argue that new revenue streams are necessary to discharge deepening debt.  And where there may be no debt, the Lamont administration is willing to create both the debt and the need. A report filed the day after Malloy presented his budget to the General Assembly, a piratical Democrat crew, illuminates the ploy. Marc Fitch, an investigative reporter for the Yankee Institute who is congenitally incapable of letting a Martin Looney-like stratagem pass under his nose without notice, remarks in Lamont Budget Bankrupts Transportation Fund, Then Touts Tolls to Save It, that the Lamont administration’s “budget will freeze the transfer of vehicle sales tax revenue from the General Fund to the Special Transportation Fund, essentially bankrupting the state's transportation fund by 2021.

“The sales tax transfer from the General Fund to the STF [State Transportation Fund] was scheduled to be phased in from 8 percent of car sales tax revenue to 100 percent by 2024. General Fund transfers are not protected by the new Transportation Lock Box. Freezing the sales tax transfer at 8 percent will leave the STF underfunded by $729.8 million by 2024, according to the governor’s budget…

The budget sleight of hand will permit the Lamont administration to argue that tolling is necessary to discharge a deficit in the transportation fund caused by an administration responsible for the deficit.

One wonders how many progressive Malloyalist cooks it took to serve up the Lamont stew of “exemption eliminations,” an Orwellian expression designed to convince nutmeggers that the state, which has a claim on all assets formerly owned by private citizens, is reasserting a permanent, broad and general claim to all the people's wealth and assets. Once the general electorate assents to the state’s false claim, it is supposed citizens will be relieved that the state has not taken a bigger bite out of their wallets. Lamont is too new to the usual Orwellian misdirections of incumbent politicians to have devised the serpentine dodges everywhere evident in his budget. It may be too much to expect the real culprits to step forward and own the clever propaganda, but one must suppose that Malloy, the ex-Governor’s former Office of Policy Management chief Ben Barnes and the two leaders of the Democrat dominated General Assembly, President Pro Tem of the Senate Martin Looney and Speaker of the House Joe Aresimowicz, may have cooked up the toxic stew.

Lamont is new to the business, but he appears to be a quick study.