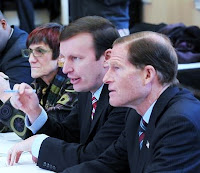 A bill introduced by Mr. Blumenthal, The Women’s Health Protection Act of 2013, would affirm unrestricted abortion by making it impossible for states to regulate abortion providers, chiefly Planned Parenthood, the largest abortion provider in the United States. To Blumenthal watchers, a bill preventing various actors in the abortion drama, including states and the federal government, from propounding any rules governing abortion at any stage of the birth process for any reason would seem to be out of character for Mr. Blumenthal, who spent much of his two decades as Attorney General in Connecticut suing businesses for having violated regulations while proposing bills to Connecticut’s General Assembly that would further hobble a Connecticut economy already gagging on needless regulations.

Only a moral struggle – a battle involving angels of light and devils of darkness – could justify such a sharp reversal of character.

Mr. Blumenthal carried both the virtues and vices he nurtured as Attorney General into the U.S. Senate when in 2011 he displaced U.S. Senator Chris Dodd, who left office after having said he would never accept a position as a lobbyist and then accepted a position as the chief lobbyist of the Motion Picture Association of America, demonstrating that if you stuff a politician’s conscience with enough money, the pillars of his moral universe will collapse under the weight.

One example of Mr. Blumenthal’s moral rectitude may serve for many. Following the untimely death of Cecil the Lion, poached in Africa by an American dentist, Mr. Blumenthal drafted a bill and offered the following statement: “The hunting and poaching of endangered species is a reprehensible and repugnant act. The death of this beloved lion was a preventable tragedy that demonstrates the urgent need to protect precious – and all too often vulnerable – wildlife. We cannot continue to allow innocent animals to be threatened by trophy killing – we must ensure that generations to come can experience and enjoy everything nature has to offer. I am proud to join my colleagues on this measure that will provide critical protections to animals across the globe.”

The attentive reader will note that Mr. Blumenthal’s media release is stuffed with moral gunpowder: “reprehensible and repugnant act… preventable tragedy… trophy killing… proud to join colleagues.” More than words, these are ethical shields designed to fend off any defense made by a “poacher”; we all want to place ourselves on the side of moralizing angels, do we not?  “A tear for Cecil” is itself a moral argument that overcomes most objections. Mr. Blumenthal has over the years mastered this useful rhetorical tactic. He may be the best moral gunslinger in Connecticut.
Abortion on demand – specifically, abortion after the 20th week of a pregnancy when, scientist tell us, the infant in the womb senses pain – presents a difficulty for proponents of abortion such as Mr. Blumenthal. A regulation limiting abortion to the first 20 weeks of a pregnancy, it will be noted, is not, as abortion extremists would have it, a denial of a “right to abortion.” It is a regulatory provision that recognizes a developmental process in which a fetus, passing through an early stage in the pregnancy, becomes at a later stage before birth what we might justly call, for lack of a better word, a baby. Pregnant mothers and their doctors frequently refer to fetal life in the womb beyond 20 weeks as a “baby,” which is more than a term of endearment; it is an accurate description of life in the womb at that stage of pregnancy. Ultrasound images do not lie, and a picture of the 20 week old baby is worth a thousand words.

The ultrasound pictures seriously undermine any argument to the effect that abortion is not then taking of a human life, which is why abortion providers make great efforts to purchase the efforts of senators like Mr. Blumenthal to prevent the passage of laws requiring Planned Parenthood from being compelled to share ultrasound images with its clients before preforming an abortion. “It's not what you don't know that kills you,” said Mark Twain, “it's what you know for sure that ain't true.” Ultrasounds place seeds of doubt in the minds of Planned Parenthood’s clients. Anyone, including scientists, who has seen an ultrasound of an unborn baby at 20 weeks knows it ain’t true that the picture shows a mass of undifferentiated protoplasm.

Videos widely circulated within the past few weeks showing Planned Parenthood personnel dickering with sting operators pretending to be clients interested in purchasing baby body parts for scientific purposes may possibly convince some senators who had seen the videos – though not, of course, Mr. Blumenthal – that high officials in Planned Parenthood also know what every mother knows who has carried a baby for 20 weeks or more. Indeed, the merchants of baby parts use ultrasound so that they may deliver their product to their purchaser without “crunching” the goods.

This time around, its’s going to be a little difficult for the dry-eyed Mr. Blumenthal to assume the moral high ground in his defense of Planned Parenthood officials who, while sipping drinks and munching on salad, assure clients in the market for baby body parts that they can easily convince officiating abortionists to re-orient the late term baby in the uterus so that the corpse might be delivered without “crunching” deliverable body parts. Any Attorney General worth his pay grade could tell Mr. Blumenthal that this process violates federal law, if not Mr. Blumenthal’s too tender conscience.