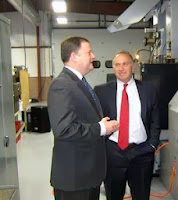 Mr. McKinney is an announced candidate for governor, a position now held by Governor Dannel Malloy, the first Democratic chief executive in more than 20 years and the nominal head of his party.

The march to Washington through the 5th District has been traveled before by Mr. Greenberg. At the 2012 Republican nominating convention, Mr. Greenberg was a contender for the position, which ultimately fell to then state Senator Andrew Roraback who, following his loss to Ms. Esty, was appointed a superior court judge by Mr. Malloy. Mr. Greenberg endorsed Mr. Roraback. The Democratic contenders at the time were Ms. Esty and then Speaker of the State House of Representatives Chris Donovan, whose campaign was derailed when the FBI moved to arrest Mr. Donovan’s campaign finance manager and others associated with his campaign. A moderate Republican who was liberal on social issues, Mr. Roraback lost to Ms. Esty by less than 7,500 votes.

Mr. McKinney’s endorsement of Mr. Greenberg was immediately denounced by state Democrats in terms that mesh nicely with an effort on the part of national Democrats to tie Republican candidates to the U.S. Congress to the Tea Party, regarded by many Democratic strategists as an anvil that, once effectively fastened to the neck of any Republican running for office, would be certain to sink a campaign.

In the national campaign script, written for the most part by left of center progressives, the Tea Party is treated as a devilish institution. It was uber-propagandist V. I. Lenin who said that if you label something effectively, you don’t have to argue with it, and there are some who believe that Beltway script writers and labelers set a standard for political skulduggery when national agencies answerable to the executive department, such as the putatively non-partisan Internal Revenue Service (IRS), set out to frustrate conservative-minded groups by means of contrived and corrupt investigations. Last May, the internal auditor for the IRS reported that the agency had asked inappropriately probing questions and delayed conservative groups’ applications — in some cases for three years.

The Tea Party in Connecticut is a convenient campaign foil for Democratic Party leaders. During the last Jefferson, Jackson, Bailey gathering, Mr. Malloy singled out the Tea Party, took aim and fired: “They don’t give a darn about our economy. They would sink our economy for their own political good.”

Mr. Malloy would be hard pressed to name a single representative of the Tea Party in Connecticut. Certainly he has never invited any member of the Tea Party in in his state over to the governor’s mansion to have a beer summit on the state’s sinking economy, though Mr. Malloy has now been given the opportunity. Following the governor's strained attempt at Tea Party labeling, Bob MacGuffie, the co-founder of Right Principles, a conservative-libertarian blog, invited the him to a debate in the course of which the two might amicably discuss Connecticut’s hobbling economy.

There is nothing demonic about the Tea Party movement, though campaign demagoguery may yet succeed in putting horns on the heads of what Mr. MacGuffie has called Mr. Malloy’s neighbors. In Connecticut and throughout the left of center northeast, where progressives are feeling their oats, the once vital moderate center of Democrat Party politics has all but disappeared.  In Connecticut, where radical progressives presume to call Tea Party Patriots “extremists,” the sky is the limit, and the state Tea Party is not political force to be reckoned with – yet.

Connecticut’s Tea Party, however, can cause a world of hurt for members of the loyal opposition party who stray from constitutional orthodoxy. Just now, some members of Connecticut’s Tea Party are sorely disappointed with Republican leaders in the General Assembly who conspired with Democrats to write a gun restriction bill in the wake of the Sandy Hook massacre that will not put a large enough dent in the criminal acquisition of weapons regularly used by gang members in urban areas to assault both peaceful and non-peaceful.

Mr. McKinney’s endorsement of Mr. Greenberg, who has managed to avoid arousing the enmity of Connecticut’s Tea Party, may take some of the sharp edge off a few highly charged opponents within the Tea Party. At some point, members of the Tea Party in Connecticut must decide whether opposition on a point of principle that may sink a vigorous Republican challenge to Mr. Malloy will advance or retard their long term goals, robustly stated by Mr. MacGuffie in his debate challenge to Mr. Malloy:

“Our movement is largely about reducing federal power by urging our representatives to pass only the laws permitted by the Constitution and to unwind those that are unconstitutional. We are part of the greater liberty movement of Tea Party members, conservatives, libertarians, and constitutionalists who propose a free-market alternative to every failing liberal boondoggle the Democratic Party has foisted on us.”

Anonymous said…
Republicans must learn how to change the narrative. There is absolutely nothing radical about the Tea Party philosophy. It represents the values upon which the country was built: self-reliance, responsibility, small government, low taxes, love of family, God and country. How the Democrats were able to turn these values into negatives and paint the Tea Party followers as extreme is mind boggling. If anyone is radical, it's the Democrats promoting a Marxist form of government. Republicans must correct the record and define what they're about lest the Democrats again mischaracterize them in 2014.
8:47 AM