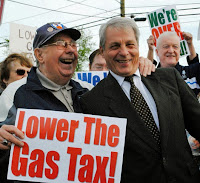 It was there on June 27 that Frankie Resto, recently released from prison under the state’s new and controversial Risk Reduction Earned Credits program, wandered into an EZ Mart store and shot to death Ibraham Ghazal, according to police who later apprehended and arrested Mr. Resto for the murder.
Mr. Resto earned 199 days’ worth of credits toward early release while serving a prison sentence for two prior robberies.
The murder of Ghazal almost immediately called into question both the purpose and the construction of the early release program, which enables violent felons to shorten their prison sentences if they abide by certain administrative rules.
Prison officials and the Malloy administration, as well as legislators who crafted the program, evidentially wished to place in the hands of prison officials additional tools they felt would contribute to reducing risky behavior within the prison, hence the title of the program.

Following the murder of Mr. Ghazal, Mr. Suzio released a letter he sent to Governor Dannel Malloy in the course of which he urges Mr. Malloy to suspend the program:
“I urge you to suspend the state's new Risk Reduction Earned Credits program and to order Department of Correction Commissioner Leo Arnone to withhold all early release credits given to inmates with a history of violent crime pending a review of how the program has been implemented and the public safety protected.”
Mr. Suzio quite reasonably points out that The Risk Reduction Earned Credit program, according to Department of Correction Commissioner Leo Arnone, “is being administered without the requirement for an updated psychiatric examination,” a deficiency that “raises serious questions of public safety as more and more violent Connecticut inmates are getting time taken off their sentences. How can criminals with a history of violent crimes such as rape, arson, and child molestation be allowed early release into the public without the requirement for a current psychiatric examination?”
Almost immediately after the EZ Mart murder, reporters and others noted, as did Mr. Suzio, that Mr. Resto had been released under the auspices of the new program. Had Mr. Resto served his full term, he would not have been present at the EZ Mart on June 27 when the victim, having obliged Mr. Resto by surrendering the money from his register on demand, was never-the-less shot to death, police say, by Mr. Resto.
Had Mr. Resto shot a dozen people, he could not have been sentenced to death in Connecticut, because the General Assembly, dominated by Democrats, had abolished the death penalty during its short session, which in the past had been convened to settle budgetary issues. One of the arguments put forward by anti-death penalty proponents was that the penalty did not deter capital felony crimes. The judicial sausage grinder, it was said, ground so slowly in the case of capital felony crimes that it did not deter people like Mr. Resto from murdering people like Mr. Ghazal.
One wonders whether the provisions of the Risk Reduction Earned Credit program, as well as readjusted sentences that depend on good behavior behind bars, will reduce such crimes as occurred in Meriden. If a criminal knows that his sentence for having committed murder, rape, arson or child molestation could be reduced depending upon his behavior while in prison, would he be more or less likely to commit suchcrimes?
Does the prospect of shorted sentences increase the likelihood of crime by reducing penalties? While the earned credit program may reduce the risk of errant behavior while in prison, and therefore may or may not reduce risk of injury to prisoners and prison staff, cons are very good at conning prison officials and legislators. The risk reduction program, we know of a certainty, did not reduce the risk of death for Mr. Ghazal.
Mr. Suzio’s request is a very modest one: He is simply asking that updated psychiatric examinations should be required before prison officials release another Resto into towns across the state whose citizens have a right to full protection under the laws. Some of those citizens may well vote in the upcoming elections against legislators who spurn their constitutional obligations to protect them from the risks of a poorly drafted and conceived Risk Reduction Earned Credit program.
Mr. Suzio's letter follows:

On June 27 an innocent Meriden store owner was murdered in cold blood. An inmate let out of prison under the "Early Release" law has been charged with the crime. All too often violent criminals are out of jail before their victims leave the hospital. In this case, the victim is dead and his family left with a lifetime of suffering. I urge you to suspend the state's new Risk Reduction Earned Credit program and to order Commissioner Arnone to withhold all early release credits given to inmates with a history of violent crime pending a review of how the program has been implemented and the public safety protected

The Risk Reduction Earned Credit program enables violent felons to be released early from prison. According to Commissioner Arnone, the program is being administered without the requirement for an updated psychiatric examination. This raises serious questions of public safety as more and more violent Connecticut inmates are getting time taken off their sentences. How can criminals with a history of violent crimes such as rape, arson, and child molestation be allowed early release into the public without the requirement for a current psychiatric examination?

Inmate Frankie Resto, of Meriden, faces murder charges in connection with the June 27 killing of Ibrahim Ghazal in Ghazal’s Meriden EZ Mart store. If Resto had been required to serve the full 75-month sentence for two previous armed robbery convictions, he would have been in prison until October of this year. He was released in April after receiving 199 days of Risk Reduction Earned Credits.
I am seeking to prevent future tragedies like the one we have seen in my hometown of Meriden. Thousands of violent criminals held in Connecticut prisons may be released without psychiatric examination. I am calling on you to suspend this flawed program so that the issue of psychiatric evaluations can be addressed and public safety protected. We must learn a lesson from the murder in Meriden before thousands of other violent criminals are prematurely released into the population.

Thank you for your attention to this matter. I know you share my feeling that public safety must be our number one priority.