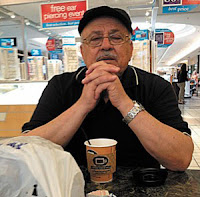 On July 6, two days after Independence Day, the children of Meriden store owner Ibraham Ghazal were featured in the Meriden Record Journal. Very likely they would have preferred to remain in obscurity, but the murder of their father had thrust notoriety upon them.
A little more than a week earlier, the father of Tamer and Tharwat Ghazal had been shot and killed in the store he owned with a partner by a gunman who, it later was determined, had been a candidate for a Risk Reduction Credit Program passed into law by the General Assembly at the end of its hectic session.
Tamer Ghazal, an attorney from Jordan, was reluctant to talk about the murder. But when he was told by the paper’s reporter that the likely gunman who had killed his father had been released from prison without having served his full sentence for an earlier robbery, he asked, “How did he get out early?”


A bewildered store clerk working the cash register at the EZ Mart during the crime – Mr. Ghazal surrendered the cash on demand but was murdered anyway – observed, “He should not be walking the streets. How can they leave him this way? He is a dangerous man.”

Sentenced for first degree robbery in January 2007 to thirteen years in prison -- suspended after six and a quarter years -- and three years probation, Frankie Resto, later arrested as the gunman, had been released from prison on April 12, seven months before his term was due to expire.
A candidate for the state’s new Risk Reduction Earned Credit Program, Mr. Resto, was given a reduction in his sentence. The legislation that created the program was made retroactive by the Democratic dominated legislature, which means its provision applied to prisoners serving time before the bill’s enactment.
The answer to Mr. Tharwat’s question very likely will not please him. Mr. Resto was let free seven months before his due date for release because the General Assembly – some say to reduce prison costs at a time when the state’s budget is once again in arrears – wrote into law a program that permits violent criminals to shave time off their sentences for good behavior while in prison.
Undersecretary for criminal justice policy at the state Office of Policy and Management Michael Lawlor has said that the new Risk Reduction Earned Credit Program simply moves the date of parole, and he pointed out that not everyone is offered parole, news that is not likely to comfort the children of Mr. Ghazal.


Mr. Resto, said Mr. Lawlor, was flagged as a high-risk inmate and served 91 percent of his sentence. Under the old dispensation, he would have been released earlier: “If we went back to the way it was a year ago, he would have gotten out earlier. We prefer a system where we identify who is a higher risk and they serve a larger portion of their sentence. Had he gotten no credits he would have served three or four months longer. But under the old system, he would have been paroled earlier.” One of the purposes of the new bill, Mr. Lawlor said, was to reduce recidivism, a purpose wasted upon Mr. Resto.
Any connection between recidivism and the state’s new Risk Reduction Earned Credit Program may not be obvious to the children of Mr. Ghazal – or, indeed, anyone else. Is Mr. Lawlor seriously suggesting that a program designed to reduce risks to prison officials posed by the unacceptable behavior of those in prison will also reduce the possibility of repetitive criminal activity when released prisoners are no longer under the jurisdiction of prison administrators? Do the names Hayes and Komisarjevsky ring a bell? Is it possible that Mr. Lawlor and Mr. Malloy, a former prosecutor, do not understand that prisoners are called “cons” for good reason?


Len Suzio, a state Senator whose district includes Meriden, said that the crime “underscores a problem with this new law. How could he have gotten out early? He earned those credits. How could a guy with such a violent record get those credits?”
Mr. Suzio’s view that violent criminals should not be eligible for the program struck a responsive chord with his Democratic opponent in the 13th District Senate race, Dante Bartolomeo, who agreed that “It shouldn’t be used for violent offenders. Clearly this gentleman should not have been released early.”
Perhaps on behalf of the children of the murdered Mr. Ghazal, Ms. Bartolomeo might have a word with Mr. Lawlor, who might just want to plant a word in Governor Dannel Malloy’s ear. The most partisan governor in two decades, Mr. Malloy has not been receptive to suggestions made by Republicans.
A governor intent on giving prison administrators tools he hopes may create a more manageable prison environment never-the-less is constitutionally obligated to protect the public from murderers, rapists and other violent criminals bent on mayhem. The FIRST and most important duty of a government is to protect its citizens from violent predators whose sentences should never have been reduced to accommodate prison officials.