Obama, the Joyful Cynic, and the Pitcher 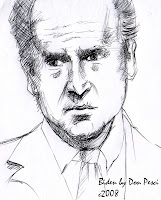 The rapidity with which the “candidate of change” changes is astounding.

In choosing as his Vice President Joe Biden, a fixture that has been in the senate long enough to acquire cobwebs, Obama has surrendered any claim to be the candidate of change in Washington. What Obama's choice really signifies is that the promises a primary candidate makes on the campaign trail “ain’t worth a pitcher of warm p**s,” as FDR’s Vice President John Nance “Cactus Jack" Garner once said of the vice presidency.

Garner, incidentally, was not a cynic. He served in Congress for 30 years, two of them as Minority Leader and two as Speaker of the House. He ran for president against Roosevelt but released his delegate to FDR at the nomination convention, for which he was awarded the warm pitcher of p**s. He opposed Roosevelt’s decision to run for a fourth term, challenged FDR for the party’s nomination, lost, and thereafter retired to his Texas homestead, regaling the locals with colorful stories about his life in Washington. During his life in politics, he refused to campaign for votes and refused the use of an official car to ferry him hither and yon. Speaker of the House Nancy “Gimme a Jet” Pelosi is not there yet. He also protested prohibition by downing a glass of whisky once a day throughout the prohibition years.

In modern times, politicking is endless; third rate congresspersons jet here and there on the public dole, and no one would offend political propriety by lighting up a cigar in one of their endless campaign commercials to protest the prohibition against smoking in public places.

Cynicism, in the modern period, wears a smile and is cynical about everthing but political orthodoxy.

The vice presidential office itself acquired new luster with the ascendancy of Dick Cheney, only because the President George Bush’s opponents in the media – they are legion -- were not willing to credit him with his successes. The skinny about Bush was that he was stupid. He wasn’t and isn’t. But in American politics, and increasingly in American journalism, the truth is never permitted to trump expectations outlined in absurdly comical political narratives.

The most important story of the decade is that, owing to the leadership of General Petraeus, called by idiot bloggers “General BetrayUs, and Nouri Kamel Mohammed Hassan al-Maliki, written off as a puppet of Dick Cheney, Bush may be able to bring the troops out of Iraq in time for Obama coronation, but some journalists would rather choke on a the fact than spit it out.

It has not taken long for a Chicago politician of Obama’s accomplishments to recognize all this. Obama is an agent of change only in the sense that he is able to change his positions on major issues in a nanosecond, without repercussions. In the American political dream, hope overcomes reality – at least in the short run and, in the long run, we are all dead. But Obama is something new under the political sun: a cynic wrapped in smiles, even a joyful cynic.

It certainly is ironic that the most accomplished politician out of Chicago, a hotbed of machine politicians, should claim to be trans-political, in addition to being trans-racial.

The classical Greek cynic is Antitheses, a student of Socrates and the father of Greek Cynicism, which later trailed off into Stoicism. The mark of the Cynic was his absolute rejection of political authority in favor of a “natural” rather than an artificial mode of existence. The Cynics, rugged individualists unattached to formal Greek schools, practiced anaideia or shamelessness, an absolute rejection of public norms. Radical individualism and sexual liberation flow directly from the Greek Cynics.

When Diogenes of Sinope was reproached by Plato, a pampered court philosopher, who found the “street philosopher” washing lettuce in a stream, he received a classic Cynic comeuppance. ‘Had you paid court to Dionysius,” Plato said quietly to Diogenes, “you wouldn’t now be washing lettuces,” to which Diogenes replied, “If you had washed lettuces, you wouldn’t have paid court to Dionysius”

The notion that politics in Washington DC can be changed from the inside out by joyful cynics is itself cynical.