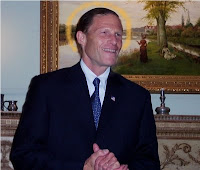 Here’s a novel idea - why doesn’t Attorney General Dick Blumenthal file a lawsuit against Countrywide Financial and seek damages for their predatory and fraudulent lending practices that have resulted in thousands of foreclosures, including an untold amount in Connecticut?

Substantively and procedurally, the suit would be a no-brainer but for the fact that Blumenthal is a Democrat. He could piggy-back his suit on a suit being brought by Attorney General Lisa Madigan of Illinois, Sen. Barack Obama’s hometown. Blumenthal, after all, has made his career by hopping eagerly on other attorneys' general hobby horses.

So what’s the problem?

Maybe Dick Blumenthal won’t do it because if he did, he might be able to question, under oath, Angelo Mozlio, the CEO of Countrywide who arranged for V.I.P. loans to special customers like U.S. Sen Chris Dodd. He might ask Mozilo why he offered generous interest rates and waiving of points and fees to Dodd on two properties he owns with his wife, Jackie Clegg, in Washington, D.C. and East Haddam, CT.