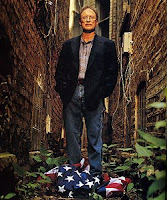 Another associate of Barack Obama, former terrorist now Distinguished Professor of Education at the University of Illinois, Chicago, Bill Ayers, is shown in an article on him that appeared in Chicago Magazine with a flag rumpled at his feet, a Mona Lisa smile coursing across his face.

Ayers, one supposes, is no fan of flag pins.

Sol Stern in City Journal writes that Ayers is highly influential among the nation's educators: "Ayers’s texts on the imperative of social-justice teaching are among the most popular works in the syllabi of the nation’s teacher-ed schools and teacher-training institutes. One of Ayers’s major themes is that the American public school system is nothing but a reflection of capitalist hegemony. Thus, the mission of all progressive teachers is to take back the classrooms and turn them into laboratories of revolutionary change."

Sometimes, while sipping double lattes at Starbucks – Ayres admits he’s addicted to the stuff – his mind reverts to the glory days of yesteryear. Barack Obama’s passing friendship with Ayres, one of the founding members of the terrorist Weathermen, has hauled him along with his wife, Bernardine Dohrn, to the center of the political stage. Ayres has written a memoir about his fifteen minutes of fame called Fugitive Days.

Of the two, Dohrn was in the silly sixties the more radical. She was dubbed "La Pasionaria of the Lunatic Left" by then FBI director J. Edgar Hoover because she likeed to wear mini-skirts and knee high boots. The two “hooked up” after three of their comrades were blown up when a bomb accidentally exploded and killed them. Doren and Ayres have been married since 1982. Of those days, Ayres now says, "I acted appropriately in the context of those times."

Political consultant Don Rose, who has written about the Days of Rage, says, “What made Ayers of particular interest then was that he was the son of a captain of industry. Now he's interesting because, of all the farther-out radicals, he has achieved the most scholarly reputation."

The Chicago Magazine piece on Ayres is aptly titled, “No Regrets.”