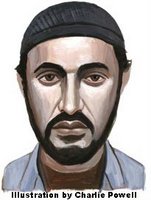 The usual sleuths are snooping around the corpse in an attempt to find out who done it.

An Associated Press report indicates that “Tips from within al-Zarqawi's own terror network helped the U.S. locate and bomb a safe house where the al-Qaida leader was meeting in secret with top associates.”

Mowaffak al-Rubaie, Iraq's national security adviser told a reporter from the New York Times, “"We have managed to infiltrate this organization,” but the tight-lipped security advisor declined to elaborate. An unnamed Jordanian official told the Times – which also tends to be tight-lipped concerning its sources – “the mission that killed Mr. Zarqawi was a joint operation conducted by the Americans and Jordanian intelligence. The source inside Mr. Zarqawi's group, the Jordanian official said, had been cultivated at least in part by Jordanian intelligence agents. ‘There was a man from Zarqawi's group who handed over the information,’ the Jordanian official said.”

The good news is that the wall of silence that surrounds murderous terrorists like the late Zarqawi has begun to crumble. Friendly overtures made by Zarqawi’s thugs to Sunnis may have done him in, according to one report: “…the Jordanian-born al-Zarqawi, who was sensitive to U.S.-encouraged derision of a foreigner killing Iraqis, began cozying up to Sunni insurgents. It was probably the move that led to his undoing, said Ed O'Connell, a retired Air Force intelligence officer who led manhunts for Osama bin Laden and others in Afghanistan, Iraq and Yemen.”

Zarqawi’s death was not noted in Hartford Courant editorials on the day after he was sent heavenward. The paper chose instead to write about popcorn.

Some are speculating that the oversight may have been due to the following factors: 1) The entire editorial staff had been dispatched to cover DailyKos’ annual shindig in Las Vegas. DailyKos, Moveon.org and other blogspots, some of them here in Connecticut, are supporting, monetarily and emotionally, the candidacy of Lieberman slayer Ned Lamont; 2) Courant editorialists, confused by the glad tidings, are busily arraying their prejudices for a bulky Sunday edition.