The Past and Future Skeletons in Dodd’s Closet 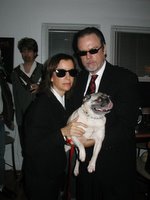 The jolt to Dodd’s brain stem did not appear to be inadvertent.

It’s no secret that McEnroe regards Droney as a crass opportunist.

My chronic distaste for Droney has mostly to do with my belief that he's a bit of a bounder, as they say, and that, during the Rowland years, this acclaimed Democratic power broker never did much to unseat the Republican governor because he and his cronies liked the way Rowland and state Treasurer Paul Silvester ran the candy store. Droney capped off that marvelous phase of his life by becoming, appropriately, Rowland's defense counsel.

McEnroe rose to the defense of people characterized by the politically inept Droney in a Hartford Courant story as “weirdoes.”

Apparently, if you deplore the stagnating war in Iraq, if your stomach turns to see your country acquire an international reputation for torture and human rights violation, if you look upon Lieberman's blithely unrepentant attitude as proof that he is prepared to make the same kind of mistake again and again, you are a left-wing weirdo. It's the kind of remark you don't want to make about the other team before the game, because it gets taped up to a wall in the locker room and fires up the opposing squad. A smarter guy than Droney would know that.

And then, having roughed up Droney, a friend of Senator Chris Dodd’s, McEnroe concluded his blog with a promise of fisticuffs to come.

Coming soon: Droney is a long time Chris Dodd guy; but if he's going to be a big player in a Dodd presidential campaign, somebody is going to have to shut Dick Morris up.

The link to an earlier Morris column, though years stale, is somewhat damaging to Dodd’s nascent presidential ambitions.

Republicans continue to marvel at such internecine warfare within Democrat ranks, not a few of them wondering: With Friends and well wishers like McEnroe peeing in the fireplace, does the Democrat Party need Republican enemies?