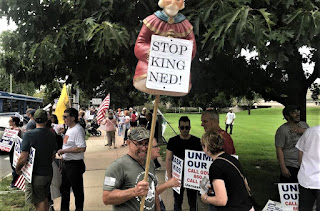 Corruption occurs in politics when no one is watching and God sleeps. In a nation in which the Christian God is mercilessly being exiled from the public square, what John Adams and other founders of the Republic called “virtue” does not rule in the hearts of men and women. Private interest is king.

“Our Constitution,” Adams said, “was made only for a moral and religious people. It is wholly inadequate to the government of any other. It should be your care, therefore, and mine, to elevate the minds of our children and exalt their courage; to accelerate and animate their industry and activity; to excite in them an habitual contempt of meanness, abhorrence of injustice and inhumanity, and an ambition to excel in every capacity, faculty, and virtue. If we suffer their minds to grovel and creep in infancy, they will grovel all their lives.”

The founders were not on good terms with groveling. It is doubtful in our day, when the separation of church and state has become a Berlin Wall, that Adams would have been able to find a post in any of our public schools. He would not have been mustered in to pedagogical service by former U.S. Senator and Governor Lowell Weicker, whose operative belief was that the First Amendment to the U.S. Constitution provided a right of freedom from religion. In fact, the Constitution provides a right of freedom of religion; prepositions are important, here as elsewhere, in interpreting texts.

In a secular culture overseen by what Jacques Maritain called “practical atheists,” and what we have come to call “cultural Christians and Jews,” Christian and Jewish virtue must take a backseat to practical morality, and the practical morality of politicians is not, most of us realize through painful observation, invariably practical or moral. Perhaps more important, the ethics approved by political commissions designed by designing politicians do not always concur with the practical ethics of the community both politicians and such commissions are sworn to represent. On occasion, the opposite is true. Sometimes – one hopes rarely – a narrow political constituency is less moral than representative politicians. How else to explain the reelection to office in Bridgeport of former felons, such as the present Mayor, the Honorable Joe Ganim?

Actually, the reelection to office of Ganim, who spent seven years in the clinker repenting his felonious activity, is easily explained. There is and has been no effective opposition party representation in Bridgeport for the last thirty years. The longest serving Mayor of Bridgeport was the Honorable Jasper McLevy (1933-1957), a socialist.

Connecticut is now a one party state, somewhat like Bridgeport – meaning, the Republican Party, as an operational entity, barely exists at all. The Governor’s Office, all the state’s Constitutional offices, all the members of Connecticut’s U.S. Constitutional Delegation, and gatekeepers in the General Assembly, effectively shut down during the Coronavirus plague, are all Democrat led.

In an era in which Adams’ “virtue” lingers as a ghostly presence in Connecticut, there is little robust contrarian opposition, and very few journalistic watchdogs unconnected to the reigning power, capable of arousing the uncorrupted virtues of a protesting public. Political interests, as we all know, should never be confused with public duties. Some politically connected watchdog groups exist only to keep the lid tightly closed on a political Pandora’s Box of corruption.

Asking the question qui bono – who benefits? – lifts the lid on corruption a bit, but never enough to expose the special interests swarming inside.  An Inspector General’s office, free of political entanglements and armed with subpoena powers, authorized to act against public agencies on complaints from citizens, would tear the lid open and allow disinfecting sunlight to rout the smelly little secrets of the politically privileged. Clever politicians have had a good deal of practice in using ersatz watchdogs to sit – sometimes for years – on the lids of the box.

Courant commentator Kevin Rennie, a former Republican state senator and representative, is responsible for first noting that the state of Connecticut – i.e. Governor Ned Lamont, who had been adorned with plenary powers by a timorous Democrat controlled General Assembly -- had “awarded a contract to a company (Sema4) where Gov. Ned Lamont’s wife’s venture capital firm was invested. The contract was awarded despite warnings from The Office of State Ethics that contracts between Annie Lamont’s firm or any associated companies and the state of Connecticut could present a conflict of interest.” Those words were written by Bob Stefanowski, who many expect will be the Republican Party nominee for Governor.

So the cat, to mix metaphors, is out of the Pandora’s Box. But it took Rennie two years, Stefanowski reminds us, to wrest through the Freedom of Information Commission what should have been public information from the Lamonts. “King Ned”, as some in the loyal opposition have styled him, has been a plenary force for two years. The governor has asserted his family has made no profit from the deal and that, if in the future Sema4 should enrich the Lamonts, he will turn over any profits to charity.

August 22, 2021
Blumenthal U.S. Senator Dick Blumenthal, usually seen in a white hat at garage door openings, has a problem, and it is the same problem that shortly will torment President Joe Biden – Afghanistan, or rather what may be left of Afghanistan after the victorious Taliban has finished toying with it. “I’ve been known,” the ubiquitous Blumenthal once said, “to make appearances at garage door openings .” Taliban leaders, after capturing Kabul and routing the Afghan government, still claim – implausibly -- they will respect the terms of a Taliban-US pledge fashioned by former President Donald Trump and implicitly reaffirmed by Biden when he made a decision to end American support involving intelligence and air power to the U.S. recognized Government of Afghanistan. The withdrawal of air power assistance and reliable on the ground intelligence was the trigger that has led to the catastrophic end result now apparent to all. The Trump-Taliban deal – Trump loves making deals – was designed t
Post a Comment
Read more