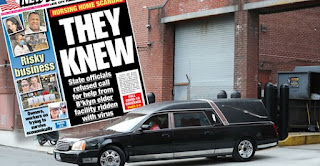 “Lamont joins other governors calling for Cuomo to resign after harassment finding,” a Hearst headline screams. Lamont was not alone in abandoning the sinking ship. Democrat notables who called for Cuomo to resign included “Gov. Dan McKee of Rhode Island, Gov. Phil Murphy of New Jersey and Gov. Tom Wolf of Pennsylvania,” and Democrat heavyweights Speaker of the U.S. House Nancy Pelosi, Majority Leader in the Senate Chuck Schumer, and President Joe Biden, who was accused several months ago by a sexual assault victim of having digitally raped her.

Always a joiner, Gov. Ned Lamont, we are told, “joined three other Northeast governors in calling for New York Gov. Andrew Cuomo to resign Tuesday evening, hours after he [Lamont] told reporters he wanted a day to react to a report that found Cuomo sexually harassed 11 women.”

Lamont has been raked over the coals for two inconvenient political postures or impostures, as the case may be: 1) having been late to the hanging, and 2) having, under considerable pressure, betrayed a friendly political associate.

Grown up readers fully understand there are no friends in politics. “If you want a friend in Washington DC,” President Harry Truman once said, “get a dog.”

The political stage, instead, is littered with working associates, and Lamont, early in his administration, came very close to the Cuomo flame. For months during the Wuhan pandemic, Lamont was content to copy Cuomo’s policies, save one. As far as we know – in the absence of a General Assembly hearing on the matter, the qualifier is necessary – Lamont, unlike Cuomo, one of New York’s most significant Coronavirus spreaders, did not transfer from hospitals to care facilities, elderly voters stricken with Coronavirus.

James’ “scathing report” was not at all ambiguous and, replete with salacious details, “unwanted groping, kissing, hugging and making inappropriate comments,” provided little wiggle room for Cuomo. But wiggle he has.

James wrote in the report, “These interviews and pieces of evidence revealed a deeply disturbing yet clear picture: Gov. Cuomo sexually harassed current and former state employees in violation of federal and state laws.”

Whispers on impeachment have now broken into screams and yells. Given all the political daggers now dangling from his body, front and back, Cuomo certainly would be justified in calling out with his last political breath, “Et tu Biden, Pelosi, Schumer… Lamont.”

Prior to the release of the James report, Lamont had begged off denouncing his fishing buddy. The letter to which Lamont affixed his name following release of the report, very short and lacking in granular detail, professed appallment: “We are appalled at the findings of the independent investigation by the New York Attorney General,” and proffered a much bandied about amelioration, “Governor Cuomo should resign from office.”

Cuomo’s media antagonist, the New York Post, was afire with indignation and condemnation and salacious details drawn from the James report, all of which, in the not yet elapsed “#Me Too” era, easily might be fashioned into a political garrote. By insisting upon waiting for completion of the five month James investigation, Lamont was antagonizing Lewis Carroll’s Queen of Hearts. “Sentence first,” said the imperious Queen to Alice, “verdict afterwards.”

Following release of the James report, Director of the Marist Poll Dr. Lee M. Miringoff said, “The court of public opinion believes the allegations against Governor Cuomo warrant his removal from office” by means of impeachment, if necessary. “If he does not resign, nearly six in ten New Yorkers believe he should be impeached. Even if he survives this scandal, his reelection prospects are rock bottom with even his Democratic base deserting him.”

A scant 32 percent of New York residents maintain that Cuomo should serve out his term, according to the poll.

Even in the pit of Hell one is inclined to draw a suitable moral from human depravity. A proper moral here might be: Stupidity corrupts, and absolute stupidity corrupts absolutely. And it is, most often in politics, pride and the false flattery of one’s political “friends” that bring from top to bottom once haloed politicians.

Crowded at the confusing top, one comes to one’s senses, finally, at the lonesome bottom.