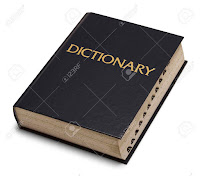 Antifa: The Progressive Party in action.

Autocrat: A member in good standing of the reigning power.

Bipartisanship: A political ploy. Political parties that have been deposed by voters cling to demands for bipartisanship with all the fervor of a drowning sailor grasping at a straw.


Campaign Debate: Yet another pointless news conference involving more than three but less than twenty prospective office holders in which the contestants hurl campaign bumper stickers at each other.

Challenging: The undying effort to drive a square peg into a round hole with a sledgehammer.

Fair Share: A share of tax money unfairly appropriated to grease the palms of those who support the party in power.

Ethical: Modes of behavior that pass scrutiny by the Devil and all his political associates.

Flag:  According to flag arsonists, a mere rag draped over the coffins of fallen soldiers.

Frank and Honest:  Often used to describe “discussions” among disputing politicians. In fact, such “discussions” are usually shouting bouts once held in smoke-filled backrooms. In 1856, Preston Brooks beat Charles Sumner, a Massachusetts Congressman, with his cane. Brooks objected to an abolitionist speech Sumner had made on the floor of the Senate called “The Crime Against Kansas.” The beating was a frank and honest one. Most discussions in Congress are neither frank nor honest nor discussions.

Freedom of the press:  The freedom of a left of center media to unload, without serious objections, on conservatives and libertarians.

Legacy Media: Washington Post reporters and editors who scorn Think Progress and Center For American Progress but who never-the-less maintain a LinkedIn account, just in case they will be laid off on the morrow.

“Let me make this clear”:  A prologue to obfuscation.

"Let me make this perfectly clear": A prologue to a more perfect obfuscation.

Malloy, Dannel: Approval rating 15 percent, Governor of the failed state of Connecticut, now teaching courses on government and law at Boston College’s The Rappaport Center for Law and Public Policy, which is not in Boston.

Media: The filtration system through which  people receive political ideas, a not inconsiderable part of the public's sensory apparatus. The media in Connecticut, with precious few exceptions, is the Cyclopsian eyeball of the Democrat Party.

“Move forward”: An amorphous expression used mostly by progressives that begs the question, “In which direction shall we move?” The forward thrust of time will move even dead bodies forward – usually with the current. Those assailed by this expression should bear in mind G. K. Chesterton’s sage observation: “A dead thing can go with the stream, but only a living thing can go against it.”

Partisanship: A term of political abuse used by autocrats to further denigrate a feeble opposition.

Paywall: The only wall the legacy media supports.

Pragmatism: The last refuge of scoundrels.

Process: A method of disarming whistleblowers and preventing necessary reform.

Progressive: A masked socialist. Kill-The-Rich Folk, some of them rich (see Soros) who believe they will never run out of other people’s money.

The Rich:  Anyone making more than $200,000 a year. Comes in two flavors: plundered and plunderable.

Soros, George: Patron of progressive causes, breaker of nations, wealthy beyond belief founder of the Open Society who would not know an open society if it bit him on the butt.

Transparent: Public information that remains for the public to view after politicians have successfully subverted any and all Freedom of Information requirements.

Troubling: One of those spats-wearing terms by which politicians – who could not find it in their hearts bravely to denounce a Stalin or a Hitler – express their Ivy League discontent with a situation their frank and honest, much less tolerant moms and dads would consider intolerable.