Blumenthal, The Senator From Planned Parenthood 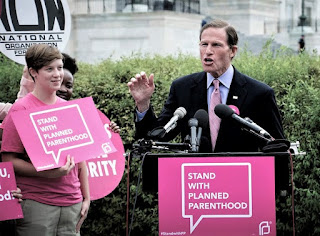 In the matter of abortion, U.S. Senator Dick Blumenthal is all in.

The Senator, while he was for 20 years Connecticut’s Attorney General, was not known to shy away from prosecuting companies large and small that had violated some obscure regulation. He also had recommended regulations to Connecticut’s General Assembly if he found that a regulation would satisfy his own view of ethical commerce, much to the dismay of Connecticut companies already burdened with excessive regulations. When he moved from the Attorney General’s office to the U.S. Senate, Mr. Blumenthal left in his wake a trail of regulatory tears flowing down the cheeks of his commercial targets, which for years had found their assets diverted to court costs. His successor, Attorney General George Jepsen, almost immediately swept hundreds of such nuisance cases from the books.

Moving into the U.S. Senate, Mr. Blumenthal brought all his vices as Attorney General with him and soon acquired a reputation as Connecticut’s first consumer protection senator.

In addition to favoring abortion at all stages of a pregnancy, including late term abortions, Mr. Blumenthal, as his political record in office attests, is pro-regulation – with one glaring exception. In an odd and hypocritical lapse, he generally favors the regulation of Big Business but has consistently resisted any regulation of Big Abortion. Planned Parenthood is the largest abortion provider in the United States. Mr. Blumenthal’s chief of staff, Laurie Rubiner, was once employed as Vice President for Public Policy and Advocacy for Planned Parenthood Federation of America (PPFA) before she took up responsibilities as the senator’s chief of staff. Always kind to Planned Parenthood, the abortion provider has returned the senator’s kindnesses by showering him with campaign cash.

Planned Parenthood contributed $12,000,000 to the candidacy of President Barack Obama, who through a constitutionally dubious executive order pressured the Little Sisters of the Poor, a Catholic order, to dispense condoms to its lay staff. Following a Planned Parenthood defunding vote in the senate, Mr. Blumenthal rose to the occasion and declared that the defunding would “create a public health crisis” and render health services for women “unaffordable and inaccessible,” both wildly improbable exaggerations. The bill Mr. Blumenthal zealously opposed would have transferred health funds from Planned Parenthood to similar “federally qualified health centers and community health centers that already serve ten times the number of people Planned Parenthood does, yearly,” according to the bill’s authors. Planned Parenthood’s own annual reports show a significant decrease in cancer screening and prevention services – from 2,007,371 in 2006 to 935,573 in 2013 – and a dramatic uptick in abortions – from, 289,750 in 2006 to 327,653 in 2013.

Asked why he robbed banks, the infamous bank robber Willie Sutton replied, “because that’s where the money is.” The money, for Planned Parenthood, is in abortion.

Following his intentionally misleading remarks in the Senate favorable to the abortion provider, Mr. Blumenthal’s election fund received a generous $1,000 personal donation from Planned Parenthood President, Cecile Richards, who has not yet been offered or accepted an appointment to the staff of the senator from Planned Parenthood.

Mr. Blumenthal’s operative rule during his entire political life, both as Attorney General and Senator, has been that necessary regulation is the balm that cures the harmful effects of greedy businesses overly concerned with profits. To protect the general public, all businesses must submit to a regulatory apparatus enforced by such ethical paragons as Mr. Blumenthal, who has not sold his soul to the devil of commerce.

And Mr. Blumenthal’s ironclad rule has been waived only in ONE  instance. For the senator from Planned Parenthood, extremism in defense of abortion on demand is no vice; moderation in pursuit of late term abortion is no virtue.

Here in Connecticut some years ago, Chris Powell reminds us in a recent column, “a 15-year-old girl long missing from her home in Bloomfield was discovered living with a 41-year-old man in West Hartford with whom she had been having a sexual relationship. The man impregnated her and then arranged for her abortion before returning her to his home. The abortion clinic did not report the rape to any authorities.” Had there been in place a regulation that required the abortion center to verify the age of its clients and obtain permission from a parent before operating on such young girls, the victim of statutory rape might have been properly counseled.

Since 1990, Connecticut has had a mandatory counseling law for girls under 16 seeking abortion. However, parents are not notified when adults rape their children and procure abortions for them – possibly on the shaky assumption that rapists are more fit than parents to decide such issues on behalf of their victims. A parental notification bill, Proposed Bill No. 324, has recently been introduced by state Senator Len Suzio. The proposed bill would “require parental notification prior to a minor obtaining an abortion unless the minor gives notice that she fears for her safety, in which case the matter shall be referred to the courts.” This is a common sense – and, some would argue, necessary -- regulation that most parents would favor.

But Mr. Blumenthal, in his zeal to retain a profitable and unrestricted monopoly on abortions for Planned Parenthood, will not tolerate regulations on abortion and wishes us to believe that reasonable regulations affecting abortion – a regulation, for instance, that would require an abortionist to have admitting privileges at a hospital when he or she performs late term abortions – would lead ultimately to the abolition of Roe v Wade, a laughable absurdity.

Mr. Blumenthal has never argued that the therapeutic regulations he has regularly heaped on small and large businesses during his career as attorney general and now senator abolish laws that under-gird such businesses. He more often argues that such regulations “provide an even playing field” for competing businesses. There is no necessary connection between bills regulating abortion and the abolition of Roe v Wade. Such bills affect only the profit line of abortion facilities like Planned Parenthood.

Never before during his political career has Mr. Blumenthal abstained from offering a regulation that protects the public from the predations of large businesses because the regulation would adversely impact the profits of a business protected by powerful interests. Mr. Blumenthal is now engaged in thwarting necessary regulations affecting Planned Parenthood because the senator from Planned Parenthood has now become its chief lobbyist.