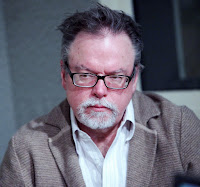 In his latest column, “Maybe A Little Bible Study With John Rowland,”  Hartford Courant columnists Colin McEnroe confesses, “As some of you know, I began going to church in April 2015.”

Groucho Marx used to joke that he would decline to join any group that would have him as a member. Mr. McEnroe is not so illiberal, but he makes plain that there are conditions: “We are not Jerry Falwell Baptists. We are LGBTQ-friendly. In fact, we have more LGBTQ pastors than we have the other kind. Baptists get kind of a bad name sometimes. Elijah Craig was a Baptist minister, and some people say he invented bourbon. That's the kind of Baptist we can be proud of.”

Mr. McEnroe’s church experience has made him reconsider his old enmity involving former Governor John Rowland: “Since about 1994, John Rowland has bothered me. I could tell, even then, he was a rotten person. I turned out to be right. Twice. Lately, though, I've been hoping he doesn't have to go back to prison. You would have to have lived through my 22-year Ahab-and-whale relationship with Rowland to understand how weird that is.”

The assault on Rowland was pressed earliest by Mr. McEnroe’s friend Bill Curry when Mr. Curry was running for Governor against Mr. McEnroe’s bete noir. When the prison doors finally clinked shut on Mr. Rowland, who had been convicted of the theft of honest services, Mr. Curry wrote a piece that said in so many words,  “There, you see. I told you so. But no one ever listens to Cassandra.”

Mr. Rowland, now having been convicted of accepting money from the husband of a politician running for office when he was talk-show hosting and concealing the payments from the ubiquitous taxman, is appealing his conviction. When he runs out of money, his appeals and his lawyers will wither away.

There may be reasons to take Mr. Rowland’s appeal seriously, but those reasons cannot be found in Holy Scripture. There are some court watchers who think the prosecutors got the wrong man. The only co-conspirator in this crime who escaped the long arm of the law was the millionaire who supplied to Mr. Rowland a disputed pay-off. The prosecution narrative forces us to accept the implausible notion that, far from money talking, it was the recipient of a concealed illegal arrangement rather than the money-man and his lawyers who had arranged the improper deal; nor has it escaped notice that Mr. Rowland was a talk-show host, NOT a politician, at the time he had fallen into sin. While talk show hosts, a species of journalists, are not immune to prosecution, the First Amendment to the U.S. Constitution hangs over the Rowland trial like a questioning Devil's Advocate.

Mr. Rowland probably will end up in prison a second time -- because there are too few prosecutors or columnists who take seriously the Biblical injunction “Let he who is without sin cast the first stone.” Rigorously observed, that injunction would empty our prisons and save permanently in-debt Connecticut lots of money that otherwise might be spent wiping every tear and smoothing every brow.

Mr. McEnroe’s Baptist Church experiences have taught him how to think dangerously – that is to say, religiously – about what we generally consider non-religious issues: Would it be worthwhile for Mr. McEnroe to sup with Mr. Rowland, his former political nemesis?

Well yes. Mr. McEnroe answers: “My favorite part of Mark is 2:13-17, where Jesus goes to this nice-sounding dinner and insists on eating with the tax collectors (whom everybody really, really hates) and the sinners. Because what would be the point of eating with the people who aren't totally crappy?”

The Jews of Jesus’s time hated tax collectors – Matthew, the evangelist, may have been one of them – because the taxes collected were used to finance their own oppression at the hands of Roman overlords who later destroyed their temple and crucified Jesus, which was not very Christian of them. This hands-off religion prohibition has slyly entered American jurisprudence through a Constitutional back door which prohibits the governing authority to promulgate or enforce laws affecting religious expression (see the relevant clause in  the First Amendment to the U.S. Constitution).

American Baptists, like Catholics, understand well the uses of government oppression to deny religious expression in a public square constitutionally open to all. When – if ever – Mr. McEnroe does have lunch with the sinner Rowland, the three gathered together (see Matthew 18:20 “For where two or three are gathered in my name, there am I among them”) should bat around the question: Why should the public square be closed to promptings of the Christian spirit?

Baptists and other Christians in Connecticut all would like to see a transcript of that discussion.

October 15, 2019
Steve Hilton , a Fox News commentator who over the weekend had connected some Burisma corruption dots, had this to say about Connecticut U.S. Senator Dick Blumenthal’s association with the tangled knot of corruption in Ukraine: “We cross-referenced the Senate co-sponsors of Ed Markey's Ukraine gas bill with the list of Democrats whom Burisma lobbyist, David Leiter, routinely gave money to and found another one -- one of the most sanctimonious of them all, actually -- Sen. Richard Blumenthal."
Post a Comment
Read more

April 17, 2020
Blumenthal and Murphy U.S. Senator Chris Murphy has been roughly cuffed by some news outlets, but not by Vox, which published on April 16 a worshipful article on Connecticut’s Junior Senator, “ The Senator of State : How Connecticut’s Chris Murphy, a rising Democratic star, would run the world.” On April 15, The Federalist mentioned Murphy in an article entitled “ Sen. Chris Murphy: China And The World Health Organization Did Nothing Wrong . The lede was a blow to Murphy’s solar plexus: “Democratic Connecticut Sen. Chris Murphy exonerated China of any wrongdoing over the global pandemic stemming from the novel Wuhan coronavirus on Tuesday. “’The reason that we’re in the crisis that we are today is not because of anything that China did, is not because of anything the WHO [World Health Organization] did,’ said Murphy during a prime-time interview with CNN’s Anderson Cooper.”
Post a Comment
Read more