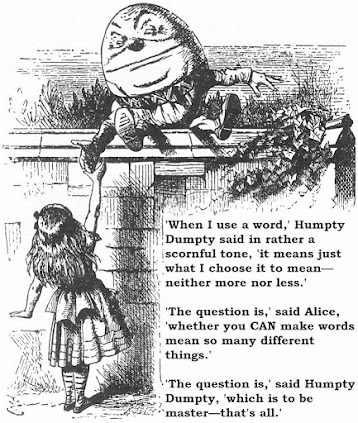 In Lewis Caroll’s Through The Looking Glass, Alice and Humpty Dumpty are having a quarrel concerning the proper meaning of words.

“’When I use a word,’ Humpty Dumpty said in rather a scornful tone, ‘it means just what I choose it to mean — neither more nor less.’

“’The question is,’ said Alice, ‘whether you can make words mean so many different things.’

This dispute is, among other things, a political primer.

Such is the power of autocracy that the autocrat can shape the language as he chooses in a system in which all important political matters are decided by arrogant, Humpty Dumpty like figures,. Modern chief executives usually deploy degreed communication directors to persuasively “make words mean so many different things.”

Since autocratic political force essentially shatters the sacred republican-democratic covenant between rulers and the governed, according to which the governed must assent to laws – without which assent, the laws are void -- not only is the purity of the language threatened, the whole democratic-republican constitutional scheme of things is effectively overturned to serve the purposes of the autocrat.

Constitutional government, the founders of the American Republic knew, is the surest preventative of autocratic government, partly because American constitutional governance prevents the aggregation of power in the hands of autocratic and whimsical Humpty Dumpties by parceling power into three functionally discrete but co-equal branches of government: executive, legislative and judicial.

The Coronavirus hobgobblin has made Humpty Dumpties of all state and national chief executives. The constitutional dams have burst, and the separate powers have been channeled to governors of the states, who have become chief executives, legislators and judges.

For more than a year and a half, Governor Ned Lamont has disposed of powers that would make a Caligula blush. Even the half mad Roman Emperor – and deified god -- Caligula would have met a stern resistance from the Roman Senate had he proposed to shut down for more than a year businesses in Imperial Rome. Farmers first, and later an empty bellied proletariat, would have stormed the imperial palace demanding bread to accompany the usual Roman circus.

Some Humpty Dumpty governors are more suited than others to rule by gubernatorial fiat. Lamont’s fishing buddy, former Governor of New York Andrew Cuomo did not survive close scrutiny by a vigilant media, the people’s Pretorian Guard. Lamont’s character, most political watchers will agree, is sweeter and more agreeable that that of the imperious Cuomo.

If one asks, more than a year and a half after Lamont was graced by an absent-without-leave (AWOL) legislature with plenary powers, “How goes the republic in the nation’s Constitution State,” one is forced by the reality floating under all our noses to answer, “It’s heading for the exit.”

To academics, of course, all questions concerning the wellbeing of republican and constitutional governance are purely academic, a matter to be settled over tea and toast among colleagues. The health of the republic has little to do with the physical health and wellbeing of the people in Connecticut.

According to a Hartford Courant story, Lamont plans to ask “the legislature” to extend his plenary powers a sixth time until the next legislative session rolls around  in early February 2022. As a practical matter, and a useful campaign ploy, individual General Assembly members will not have executed their assigned constitutional obligations for a year and a half, individual members of the General Assembly having left no fingerprints on pertinent legislation voters may consult before they cast their votes in future elections.

There is little doubt the legislature, both houses of which are controlled by Democrats, will assent to the extension. In point of fact, the extension will be ratified by Democrat majorities in the General Assembly, the minority Republican Party voting no.

Lamont –a really nice guy – has assured the people’s Pretorian Guard, “I’ve tried to use the executive powers very narrowly, related to COVID and public health,’’ and “we’re not going to abuse this authority.’’

Lamont is either using then royal “we”— which would be appropriate under the circumstance -- or by “we” he means the leaders of his Party’s caucus in the General Assembly, Ritter and Looney, Democrat caucus whips, whose fingerprints on his authorial extraordinary powers he regards as advisable.

“What I want is legislative input on the executive orders. I’d like to know where they stand. I’d like to have their fingerprints on some of the decisions,” he said.

Translation: I need an assent by the leaders of the Democrat caucus in the General Assembly, so that I may claim legislative authority. Here we find Humpty Dumpty using the words “legislative input” to mean exactly what Lamont and the two other members of his triumvirate, Ritter and Looney, say they mean, “neither more nor less.”

“The proposed sixth extension of his powers is needed, he [Lamont] said, because action by the General Assembly ‘takes too long’ during a public health emergency,” according to the Courant.

Right. Republican governance certainly is an inconvenience, and on this point Lamont, Ritter and Looney agree.

The great question of Constitutional, republican governance amounts in the end to no more than this:  “’The question is,’ said Humpty Dumpty, ‘which is to be master — that’s all.’”