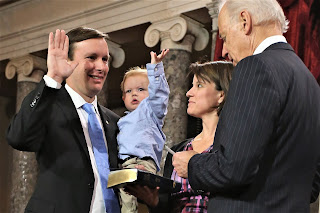 Biden mock-swearing-in Murphy, but not to his cabinet
We shortly will be back to Barack Obama in our foreign policy.

Murphy had been touted in Connecticut’s media as a possible Secretary of State appointment. The senator, blushingly modest, said at the time he had no intentions of leaving the Senate and planned to run for reelection to Congress, but this is the usual demurral of young and ambitious congressmen on the make, and few political watchers, even among the most credulous of Connecticut’s reporters, believed Murphy would spurn a cabinet position offered by Biden.

Murphy’s experience in foreign policy is much narrower than that of Blinken, a layover from the administration of “lead from behind” President Barack Obama. Blinken was former deputy secretary of state under Obama and, according to the Times, he is “expected to help calm American diplomats and global leaders alike after four years of the Trump administration’s ricocheting strategies and nationalist swaggering.”

Jake Sullivan, Biden’s likely national security adviser, according to the Times, was once the head of policy planning at the State Department reporting to Secretary of State Hillary Clinton in the Obama administration.

“Together,” the Times reported, “Mr. Blinken and Mr. Sullivan, good friends with a common worldview, have become Mr. Biden’s brain trust and often his voice on foreign policy matters. And they led the attack on President Trump’s use of ‘America First’ as a guiding principle, saying it only isolated the United States and created opportunities and vacuums for its adversaries.”

So then, it is a virtual certainty that President Donald Trump’s “America First” doctrine will be shelved during a Biden administration because it troubles America’s allies. One can only hope that the Biden administration will place the national interests of the United States at least second in its foreign policy calculations.

During a 2015 speech at the Center for a New American Security (CNAS), Blinken unveiled his understanding of the role the United States should play in a fractious world of foreign policy intersectionality.

“In times of crisis or calamity,” Blinken said, “it is the United States that the world turns to first and always. We are not the leader of first choice because we’re always right, or because we’re universally liked, or because we can dictate outcomes. It’s because we strive to the best of our ability to align our actions with our principles, and because American leadership has a unique ability to mobilize others and to make a difference.”

CNAS loomed large in the formation of Obama’s foreign policy prescriptions. Michèle Flournoy and Kurt Campbell, two founders of CNAS -- a Washington DC think tank established in 2007 that specializes in national security issues, irregular warfare, the future of the U.S. Military, the rise of Asia as a global power, and the implications of “natural resource consumption” -- served respectively as Undersecretary of Defense for Policy and the Assistant Secretary of State for East Asian and Pacific Affairs.

Biden has chosen former United States Secretary of State in the Obama administration John Kerry as his climate envoy. The “Winter Soldier” of the anti-Vietnam War era recently tweeted, “The president-elect (sic) is right to rejoin the Paris Agreement on Day One. And he is right to recognize that Paris alone is not enough. All nations must raise ambition together, or we will all fail together. And failure is not an option.”

Kerry’s sentiment is a clumsy reworking of Benjamin Franklin's comment at the time of the signing of the Declaration of Independence: "We must all hang together, or, most assuredly, we shall all hang separately."

Murphy should not be too dispirited. Biden has obviously decided to resurrect a moribund Obama foreign policy, and he is drawing from a stable of political actors with broad experience in ‘leading from behind” nations presumed allied with the United States, a posture that, during the Obama administration, led to the rise of Iran as a Middle East purveyor of terrorism, the boosting of troops to Afghanistan and the withdrawal of troops from Iraq; Afghanistan, Obama said, was a “war of necessity” and Iraq a “war of choice.”

The withdrawal of troops from Iraq and the abrupt  disposal of “Guide of the First of September Great Revolution of the Socialist People's Libyan Arab Jamahiriya” Muammar Kaddafi --  “We came, we saw, he died,” Secretary of State in the Obama Administration Hillary Clinton memoably said at the time -- created a vacuum in North Africa and northern Syria soon filled by a resurgent ISIS. One wonders whether the CNAS think tank thought at the time that the Obama administration had failed conspicuously to align its actions with the historic principles of the United States.

George Washington did after all warn of entangling alliances, and John Adams did say that the United States was the friend of liberty everywhere, but the custodian only of our own. Both would have been considered by the New York Times in the post-modern period as nationalist swaggerers.

Murphy, not a serious foreign policy actor, is well out of it.

RayMel said…
Being neither Blue nor Red, what I've seen of Biden's Cabinet picks scares me more than Biden being President. It seems like a continuation of public figures being picked who have questionable sources of income. President Trump's' promise of draining the swamp hasn't happened. This I think is what cast him the election. Had some of these Democratic players been taken out in a lawful manner, there would be no contention of a rigged election. President Trump has until December 14th to keep his promise.
11:18 AM