Lamont At A Disadvantage With State Unions 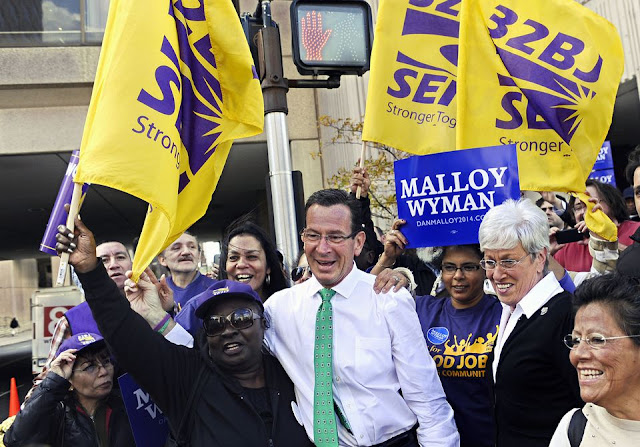 It appears that Governor Ned Lamont and teachers – which is to say, teacher unions – may be at loggerheads. Lamont wants schools in Connecticut to open in the fall because he believes, rightly, that tele-education is insufficient education. Many teachers, if they could break away from union propaganda, might agree with him.

There is little indication that young people, even when they are exposed to Coronavirus, suffer serious harm. School closings and forced sequestration, much of the data shows, are attended with a variety of serious, sometimes fatal, problems. Who then, in this head-butting contest, will prevail, the governor or state unions?

Based on previous head-buttings between Connecticut’s fourth branch of government, state employee unions, and Democrat governors, the state unions appear to have a winning edge in push and shove negotiations.

Governor Dannel Malloy and state unions were on the friendliest of terms. Indeed, Malloy gained credibility, campaign funds, and extra campaign hands among unions, by marching in strike lines, as shown in the picture above. The state contracts Governor Malloy unilaterally negotiated with unions, affirmed by a Democrat dominated General Assembly, provided raises after three years and a no-layoff provision binding on his successor, Lamont, until 2021.

It is extremely doubtful that Malloy would have assented to such provisions if he had chosen to run for governor following his second term. The surest way to escape the inevitable consequences of ruinous policies is to pass the buck to the next governor and legislature in line.

That is why the unions were able to tell Lamont to go pound sand when he requested, very politely, that the unions offer up concessions during the Connecticut’s economic death spiral, which began years before the “Chinese plague,” President Donald Trump’s recent term for Coronavirus, slithered from Wuhan, China to Governor Andrew Cuomo’s New York, and from there to Connecticut’s larger cities.

Across the nation, Connecticut has been known for some time as a “sinkhole state,” because the state’s labor costs have long exceed its ability to satisfy the terms of court enforced contracts.

Connecticut was supposed to have provided money to pay off benefits costs for state unions from a fund that too frequently had been plundered by the Democrat dominated General Assembly and shifted to the state’s General Fund. The plundered pension liability fund, in arrears by more than 60 billion dollars, has been for many years bone dry.

State contracts remove necessary budget adjustments from a democratic theater of action, the state’s legislative and executive offices, to a judicial theatre of action, state courts, which are bound to uphold contractual terms, whatever damage is inflicted upon the state by such contracts.

For these reasons, Lamont, the sinkhole governor of a sinkhole state, through no fault of his own, is very much at a disadvantage in his negotiations, if any, with unions. The state can solve all the problems cited above in a single sweep by deep-sixing in the future all contracts with unions upon the termination of present contracts. Connecticut is one of the few states that allow unions to arrange with union-friendly governors and legislators legally binding contracts that force the General Assembly to adjust budgets to satisfy the demands of SEBAC, the state union conglomerate authorized to negotiate contracts with Connecticut’s governors and its union-friendly, progressive, state legislators.

When President Franklin Roosevelt was invited by President of the National Federation of Federal Employees Luther C. Stewart to permit the unionization of federal workers, he wisely, unambiguously, and adamantly said no. Roosevelt, certainly no conservative, wrote: “All Government employees should realize that the process of collective bargaining, as usually understood, cannot be transplanted into the public service. It has its distinct and insurmountable limitations when applied to public personnel management. The very nature and purposes of Government make it impossible for administrative officials to represent fully or to bind the employer in mutual discussions with Government employee organizations. The employer is the whole people, who speak by means of laws enacted by their representatives in Congress. Accordingly, administrative officials and employees alike are governed and guided, and in many instances restricted, by laws which establish policies, procedures, or rules in personnel matters.” It is doubtful that Connecticut’s State House gatekeeper, Speaker Joe Arsimowicz, employed by a union, or other Democrat progressive legislators, would credit Roosevelt’s misgivings.

But Roosevelt was right, and we in Connecticut are now feasting on the bitter root of his cautionary warning. Every dollar of tax money spent in the state should be raised, disbursed and adjusted by a small “d” democratic legislature answerable during election periods to the people. It is the whole people through their representatives, and not unions colluding with progressive governors, who are and should be the real employers of state workers.

In addition to Coronavirus, Connecticut has been plagued for many years by legislative cowards who hope to escape the justifiable wrath of the people at election time by renting out to various political sub-groups, unions among them, their own constitutional responsibility to pass general laws applying to the whole people that are just and equitable. Justice is the giving to all what is due them under the law without favor or partiality. And equity under the law requires that lawmakers produce laws and regulations that apply equally to all and do not favor special interests.