The Ghost Monologues: Caligula and Stalin 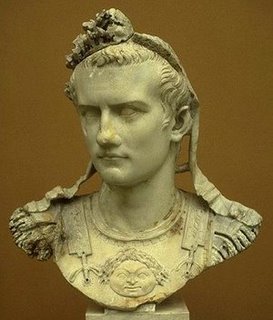 Hilliare Belloc’s advice to the rich – “Learn something about the internal combustion engine, and remember: Soon, you will die.”

It was revenge that killed the God, the pedestrian snit of a former school chum. Can you believe it? We Romans love our revenge more than life itself; a dish, it is said, better served cold. And it is this emotion, coiled in the heart like a serpent, that explains everything you need to know about the God Caligula, whose life went by contraries.

An Afterword by Chaerea


Don’t believe a word that bitch says. It’s true he lived his life by contraries – because he was perverse. He was always so, even as a young frightened boy. And it’s true that those in Rome who often claimed to be Republicans were no friends of the Republic; a Republic would have swept the whole lot of them into the dustbin. And that bit about revenge – too true. Of all of us, Caligula was the most artful in his vengeance. Vengeance is the justice of the powerless. But Caligula was not powerless, and his vengeance was not just. The very fact that it was not just was to him a spur and a permission. There was no bar he would not cross; his only friends were sycophants and actors. But what is an actor? A mask, an empty vessel, a significant gesture. How he acted! What a show he put on! Vengeance was his audience, Rome his theatre. Two things you must know about Caligua: First, that he was a sublime actor; second, that he told the truth, and told it in such a way that no one would believe him. 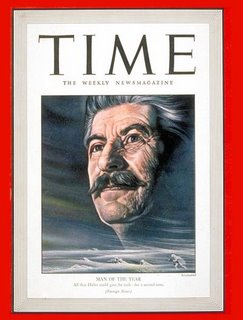 An Afterword by Gareth Jones

We were a small knot of journalists living, thinking and writing together in Moscow in the early 1930’s. Some – Malcom Muggeridge, for instance – came from the socialist camp. Muggeridge’s wife was related to the Webbs, Sidney and Beatrice, English Fabians, like George Bernard Shaw, who later on would play a walk on role in the Terror Famine. The event that parted us was the 1932-33 famine itself, not the first time that food had been used as a weapon of war by the soviets… To bring Ukraine within the soviet orbit, Stalin knew he would have to destroy all resistance. First he and his agents decapitated Ukraine: He murdered all the intellectuals – teachers, scientists, politicians, the clergy, anyone attached to the nation through their remembered affections. The peasantry was a hard nut to crack. From Roman times until the Terror Famine, Ukraine was known as “the bread basket of Europe.” Under cover of modernization, Stalin’s Five Year Plan, private farms were displaced by collectives. When the peasants proved intractable, Stalin destroyed them by creating and sustaining a famine. Communist cadres went into the villages and collected all the seed grain for the next year; they even destroyed the ovens used by the peasants to make bread. Famine stretched its boney hand over Ukraine. Whole villages died out; the trees were stripped bare by starving peasants who boiled leaves for nourishment. Rotting corpses of people and farm animals made the air unbreathable. That is what was covered from the rest of the world by the mask of Stalin’s Five Year Plan – murder on a mass scale. I saw what lay behind the mask when I defied the censors in Moscow, boarded a train and went into the countryside; so did Muggeridge. And we saw the sickening sight, Stalin’s hand lying over Ukraine, reduced to swollen belies and silent screams. We got the story out, Muggeridge in diplomatic pouches. Much good it did… We tried to say the truth, but it was smothered with lies, manufactured most effectively by Walter Duranty, the chief correspondent in Russia for the New York Times. Other journalists called him “The Great Durranty.” Muggeridge called him the worst pathological liar he had ever met in all his years in journalism. Duranty knew about the famine but suppressed news of it in his dispatches to the Times. Privately, he guessed that as many as six million people died between 1932-32; publicly, he joked that “you couldn’t make an omelet without breaking eggs.” For his reportage on Stalin’s Five Year Plan, Durranty was awarded a Pulitzer Prize. It was a prize earned at a great price. Stalin himself finally was murdered by two of his henchmen, Beryia and Krushchev. Funny, Beryia kicked the corpse and swore at it. But when it twitched, probably the result of involuntary movement, the marrow of his bones ran cold, and he ran off. That, at least is what Krushchev said. As for myself, I went to China following Moscow, and here I was murdered by communist bandits. Such were the times we lived in – bloody Times. I received no Pulitzer Prize.