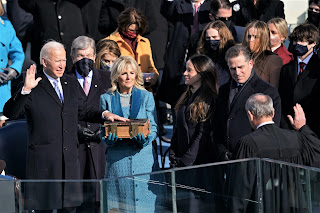 There was, during President Joe Biden’s inauguration, lots of ceremony, much of it older than Biden, but not a great deal of pomp. The pomp was dampened considerably by circumstances. On January 6, two weeks prior to the inauguration, the US Capitol building was illegally invaded by a platoon of discontents. Then too, Coronavirus, a national killjoy for nearly a year, is still with us. The masks on our faces, however necessary they may be, are beginning to weigh heavily on our spirits and seem to some an emblem of abject submission to a sometimes irrational authority.

Lady Gaga’s rendition of the Star Spangled Banner was almost operatic. Most of us recall going mute in grammar and high school when we reached for the high notes. Gaga rolled over them like a ten-wheeler. The lady can sing.

No one botched the oath of office. It remains to be seen how faithful the oath takers will be to their pledge “to execute the office of -- fill in the blank – and… to the best of [their] ability, preserve, protect and defend the Constitution of the United States."

It is very much an open question whether oaths of any kind matter much in the post-modern world, mostly because meaning of any kind does not matter to radical reformers to whom language is no more than a pretext to seize and execute power for power’s sake alone.

The baptismal sponsors of Biden, a Catholic, vowed on baby Biden’s behalf to reject Satan and all his works, to reject sin and live “in the freedom of God’s children”, to “reject the glamor of evil, and refuse to be mastered by sin.” These vows are much older than the oath of office which, a reporter on the scene helpfully explained, dates from the George Washington administration. But shouldn’t such ancient concepts – sin, Satan, binding oaths and honor – be cast off as talismans of a vanishing and outworn creed?

Biden is the second Catholic President, the first having been John Kennedy, assassinated in 1963. Five years later, Robert Kennedy, the President’s brother, and the Reverend Martin Luther King were both assassinated.

These were turbulent years, full of bloodshed and half mad politics. A decade earlier, in 1954 during the Truman administration, four Puerto Rican nationalists who wanted to pry their country from US influence shot 30 rounds from semi-automatic pistols from the Ladies’ Gallery in the US House of Representative, wounding five Representatives. They were apprehended, convicted in federal court and sentenced effectively to life terms in prison. In 1978-1979, then President Jimmy Carter commuted their sentences and all four returned to Puerto Rico, not yet a state.

The federal government in Washington is no stranger to violence. The United States has born witness to the successful assassinations of no fewer than four sitting US presidents -- Abraham Lincoln (1865), James A. Garfield (1881), William McKinley (1901), and John F. Kennedy 1963. Two other presidents -- Theodore Roosevelt (1912), a former president at the time, and Ronald Reagan (1981) – were wounded in failed assassination attempts. Truman was twice targeted for assassination, both attempts thwarted. The day room for the U.S. Secret Service's Uniformed Division at Blair House is named in honor of White House Police officer Leslie Coffelt, shot and killed during the attempt on Truman’s life.

All political violence should be, always and everywhere, unhesitatingly and unreservedly condemned by men and women of good will in the United States. Former President Trump’s condemnation of those who illegally occupied the US Capitol building was, during the ordeal, pro-forma rather than full-throated, though later he adjusted the pitch and volume of his displeasure. The condemnation of political violence committed by insurrectionist groups such as ANTIFA and some violent elements of the Black Lives Matter movement had been similarly muted while roving bands of “protestors” armed with bricks and Molotov cocktails had commandeered police stations and, in some cases, whole sections of peaceful population areas.

Many people in the United States are waiting for the Biden-Harris administration to strike these wolves on their snouts.

The centerpiece of Biden’s inaugural address was the promise of national unity. The front page of the Hartford Courant blared in large type, the day after Biden address, “Unity, not division: Biden calls for healing.” The large type call for healing followed by a few days Nancy Pelosi’s attempt to “bind together the nation’s wounds,” Lincoln’s formulation following the bloody prosecution of a Civil War, by redundantly impeaching the outgoing president yet again. The only punishment for conviction in the US Senate on impeachment charges affirmed in the US House is removal from office, and the Senate, now controlled by Democrats, is due to take up the measure sometime AFTER Trump has left office. Some constitutional scholars believe that civilians cannot be impeached.

Over a period of time, Biden will acquire gifted writers. Lincoln, quoted in Biden’s inaugural speech with proper attribution, used his own wits to write his memorable speeches. But in the post-modern period, wits may be purchased for a dime a dozen in the nations two-faced Capital, along with lobbying information and tendentious media releases, hardly read on occasion before they are published by former non-partisan editors of today’s newspapers.

Biden’s inaugural speech was, speech coaches may agree, not memorable. Biden, when he is not borrowing liberally from notable figures such as Neil Kinnock, once leader of Britain’s Labor Party, or Robert Kennedy, is no Lincoln or Churchill, and so his speech was peppered with the usual Democrat appeal to emotion and bumper sticker rhetoric, much of it easily dismissed as future campaign fodder. Just now, in a spirit of comity and unity, Democrats are attempting to drape the Trump albatross about the necks of any public official who had not denounced the titular head of their party, while they airily dismiss nearly half the country who elected Trump President as unfit for their vision of unity.