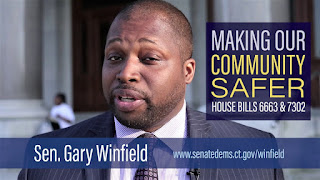 Police officers of all kinds, both old-hands and newly minted officers, are leaving Hartford Connecticut, according to a piece in a Hartford paper. No surprise there. The job, as everyone knows, is fraught with danger. Police are not accountants or legislators tucked away in a malfunctioning Coronavirus General Assembly; still less are they social workers. The pay and benefits are okay in the cities but better in suburbs. And a new “Sweeping Reform Bill” -- inspired, we are told, by police assaults on George Floyd and Breonna Taylor -- has driven multiple wedges between police across the state and their employers, Democrats and Republicans and, eventually, the urban population that police are sworn to protect.


The new bill is the brain child of State Senator Gary Winfield, who is Black.

This grammatical irritation may be  adduced by some as a strong indicator that systemic racism in the United States is ebbing, though Winfield’s bill,  suggests that little progress has been made since 1619, the year, the New York Times tells us, that marks the true beginning of the founding of the United States – the American Revolution against British overlords, the Continental Congress, US Constitution and the Bill of Rights be dammed.

As a side note, it should be mentioned that the 1619 founding of the United States, during which the first slaves were shipped to the New World, occurred 117 years AFTER what some consider an unfortunate sea journey by Christopher Columbus from Spain to San Salvador -- literal translation, “Holy Savior”. Columbus was a Christian, as were many of the Connecticut politicians who winked at the beheading of his statue in Waterbury by Brandon Ambrose, 22, of Port Chester, New York.

The Winfield Bill creates a state independent Office of the Inspector General that will be charged with investigating  all uses of deadly force by police and all instances of death in police custody; it permits a state's police accreditation body to revoke law enforcement officers’ credentials if they have been found to have used excessive force; it bans neck restraints, or "chokeholds," unless a law enforcement officer "reasonably believes" such a hold to be necessary to defend from "the use or imminent use of deadly physical force";  it eliminates “qualified immunity” for police;  and it subjects all police officers in the state  to civil suits, leaving police officers the option of claiming immunity only if they "had an objectively good faith belief” that their conduct did not violate the law. The law opens a wide door of police prosecution on many counts.

The Winfield bill was politically divisive, Democrats voting for it, Republicans against it. All the Democrat legislators who voted in favor of the bill, many of them lawyers, understood at the time they voted that exposure to civil suits, well founded or not, is a very expensive proposition, and that suits served on urban police working in Connecticut’s large cities were much more likely than similar suits in more toney towns such as West Hartford and Greenwich, both of which have been trending Democrat for some time.

Good news is a tortoise, bad news is a hare, and it did not take long for the bad news to reach the ears of Connecticut law enforcement officials and city police officers. Police unions across the state are now endorsing Republicans.

At the polls, where matters really matter to politicians, the Winfield bill and its inevitable consequences – reduced police recruitment in urban areas, where a strong police force is a necessity, a greater opportunity for socially disruptive elements to ply their various trades uninterrupted by fully manned police forces, clogged court systems and, ironically, an increase in racial disparity, among many other unintended consequences – may not affect the current elections in Connecticut. But some social bombs have long fuses.

“As a police officer the last thing you ever want is to be hated,” commented Hartford police union President Anthony Rinaldi. “It kills your drive, your love for wanting to give back and help your communities. It causes officers to feel rejected and not wanted.” The drive gone, it will not be restored by the usual palliatives: increased pay and benefits for shattered urban police departments. You can only kill a police department once; after that comes the deluge.