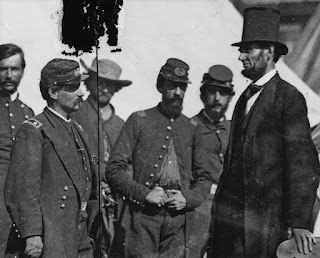 According to a story in CTMirror, “CT GOP chair says cancel culture should apply to Democrats”, the Grand Old Party of Lincoln, generally regarded as the father of the modern Republican Party, “intends to adopt a resolution condemning the history of the Democratic Party, which sprang to life in the slave-holding South and amassed a long record protecting segregation before embracing labor and civil rights — and ceding white southern voters to Republicans.”

The Connecticut GOP is now working up a resolution, and J.R. Romano, Chairman of the state GOP, is quoted in the CTMirror story as having thrown down the gauntlet to state Democrats: “We demand that the party change its name,” said J.R. Romano, the state GOP chair. “For me, I believe it is vital that every citizen know the truth about the so-called party of inclusion and acceptance. If we are to hold Christopher Columbus accountable for over 500 years after the fact, it is our duty and moral obligation to hold the Democratic Party accountable.”

Is he serious? Yes, he is serious; the resolution may go forward, though it’s doubtful the GOP will wink at Republican brown shirts as they uproot statues, deface monuments and airbrush history.

Romano did not suggest the GOP was in the process of creating a curriculum in public schools across the state that would show impressionable young children the real nature of the historic complicity of the Democrat Party in supporting slavery, Jim Crow and the setting of dogs on southern protestors gathered to fulfill Dr. Martin Luther King’s call to establish Lincoln’s “more perfect union” in his memorable “I Have A Dream” speech, delivered from the steps of the Lincoln memorial. But perhaps a curriculum guide is in the works.

Chairwoman of Connecticut’s Democrat Party Nancy DiNardo has said, according to the CTMirror story, that “Connecticut is one of the many states where Democrats renamed annual Jefferson-Jackson fundraising dinners,” and this demonstrates that Modem Democrats have “recognized the error of their ways nearly 100 years ago and since then have supported the New Deal, the Civil Rights Act of 1964, the Voting Rights Act of 1965, gay rights, gay marriage, choice, health care for all, racial justice and demilitarization of police, just to name a few important milestones, many of which Republicans have worked to defeat.”

And here history gets very messy. The name of the annual money grab for Democrats in Connecticut, “The Jefferson, Jackson, Bailey” dinner, was changed a few years back after it had been noticed very late in the day that President Thomas Jefferson, the principal author of the Declaration of Independence, was a slaver, as was “Father of the Country” George Washington, who released his slaves upon his death. The names of Jefferson and Jackson were expunged and the dinner was renamed. It was mentioned at the time in some news commentary that Jackson, the father of the modern Democrat Party, had also moved the Cherokee Indians off their ancestral lands in a long march that later became known as “The Trail of Tears”.

Not only did Mr. Jackson own hundreds of slaves, he vigorously prohibited abolitionists from distributing tracts condemning slavery, tabled abolitionist activity in Congress and was himself a slave trader, according to a piece in Salon.

The lesson commonly drawn from the desecration of Columbus statues in Connecticut is that repentance is not enough; the sins of the father should always be visited upon sons and daughters, and never mind Ezekiel as quoted above. The violent protesters prosecuting the war on statues and monuments, whipped up by the usual suspects – few of whom, one imagines, are registered Republicans -- have also attacked the Lincoln memorial, the site of King’s stirring oratory, and statues of Ulysses S. Grant, the general Lincoln chose to prosecute the Civil War, in the course of which the South was forced back into the Union, minus its slaves, at a cost of blood and tears that school children in Connecticut, as well as infantalized quasi-Marxist revolutionists, cannot picture in their worst nightmares. At the battle of Shiloh, the ground was so carpeted with dead bodies that neither northern nor southern troops could advance a foot without stepping on a corpse.

All this should be remembered rightly so that children in Connecticut will not repeat the errors of history.

We are now in the process of forgetting the remembered history that still burns brightly in the minds of the present generation. DeNardo knows very well that the nay vote breakdown during the Civil Rights Act of 1964 was: Democrats opposed 91, Republicans opposed 35. She knows as well that after passage of the 14th amendment, which had enfranchised American blacks – all of the black congressmen elected during Reconstruction were Republicans – it was Democrats, during Jim Crow era, that systematically disenfranchised blacks. Systemic racism begins here.

So then, always remembering Ezekiel, bring on the curriculum.