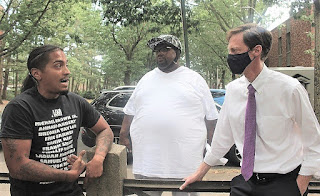 A video published by the New Haven Independent showing Mayor of New Haven Justine Elicker being mau-maued by Los Fidel, not his birth name, the day after a Columbus statue had been booted from Wooster Square Park may not be a vote-getter for Elicker during his next campaign.

Two days after the removal of the statue by the Park Commission, not the city’s elected Board of Alderman, tempers were still sparking.

“You should have been here,” Fidel told Elicker.

“Everyone makes mistakes, and I make mistakes,” Elicker responded. In retrospect, Elicker confessed, “he should have been in Wooster Square rather than in his office at City Hall on Wednesday.”

On the day of removal, Elicker had been at a safe distance from the park in his office attending to business. Two days later, he ventured out and met with about 30 protesters who had cheered as the offending statue had been carted off.

“Sitting on the grass in a circle with the group,” The New Haven Independent reported, “Elicker spent most of the first hour listening to Fidel tell his story, interspersed with critiques of the mayor. (Watch the full conversation in the video above.)”

The video captures Fidel hurling imprecations at the mayor. “F**k you!” critiqued Fidel at one point.

“I’m looking at the f**king white devil," Fidel said at another point. He then apologized for his manner, and wiped away tears as he recounted getting punched in the back of the head and having slurs shouted at him Wednesday.

Fidel spoke of the many times he has been arrested over the years, for charges including felony possession of a deadly weapon and driving under the influence. He said his first arrest came at 13, and that the deadly weapon charge had to do with fishing equipment and was exaggerated by police.

He expressed how he has felt traumatized by law enforcement growing up in Bridgeport and living in New Haven for over 15 years.

"I’m a felon. I’ve been arrested for things I didn’t do my whole life," Fidel said. He said law enforcement has falsely targeted him. "I stabbed somebody in self-defense." He said he was charged with operating a "drug factory," when in fact, he said, he had less than an ounce of marijuana at his place. (According to court records, he has been found guilty of second-degree assault, probation violation, larceny, and reckless endangerment, among other offenses.)

To be sure, life in the city under the glare of the hypercritical police is no walk in the park. But Elicker’s problem, purely political, is a bit different than Fidel’s. Will the whole affair surrounding the removal of a mute statue help or hurt Elicker politically? It may seem obscene to people who are not professional politicians, but politicians, as a general rule, have an eye cocked on political loss or gain when they engage in politics. And politicians are always on the job, so to speak, always politicking, whether they are hugging babies or, in the midst of a Coronavirus outbreak, not hugging babies.

Other protesters joined in the conversation after Fidel had recovered his manners. “Disband police officers that have lost their legitimacy because they are working as an occupying force and stealing wealth from African-American communities,” one recommended.

Elicker responded that he was “prioritizing moving along appointments and seating the police Civilian Review Board… ‘I think there are opportunities to civilianize the police force,’ Elicker said. He said he sees opportunities to have police officers show up to fewer calls, which can be diverted to other responders,” the cri de coeur of the Black Lives Matter (BLM) movement.

So it goes in New Haven, and much of this is “de ja vue all over again,” in Yogi Bera’s memorable phrase,  for people familiar withThomas Wolfe’s still readable essays published in a book titled “Radical Chic & Mau-Mauing the Flak Catchers.”

Here is Wolfe carefully probing the difference between a confrontation and a demonstration in “Mau-Mauing the Flak Catchers”:

A demonstration, like the civil-rights march on Washington in 1963, could frighten the white leadership, but it was a general fear, an external fear, like being afraid of a hurricane. But in a confrontation, in mau-mauing, the idea was to frighten white men personally, face to face. The idea was to separate the man from all the power and props of his office. Either he had enough heart to deal with the situation or he didn't. It was like to saying, "You--yes, you right there on the platform--we're not talking about the government, we're not talking about the Office of Economic Opportunity--we're talking about you, you up there with your hands shaking in your pile of papers ..."

Intimidation of this kind may not be “respectful” – but it works well enough in New Haven.