Defunding By Other Means 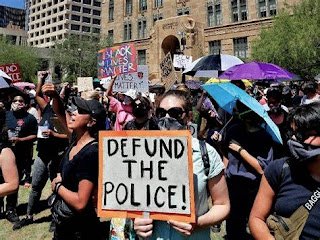 The good news is that State Senator Gary Winfield’s bill eliminating qualified immunity for all police departments across the state is not due to go into effect until July 2021, well past election day this coming November. The bad news is that the predictable consequences of the bill – a decrease in police recruitment, an increase in retirements, and an increase in insurance premiums paid by municipalities – will arrive much before July 2021.

It has been suggested by progressive legislators that the likelihood of suits attending a withdrawal of partial immunity is a scare tactic deployed by Trump loving Republicans who are 1) privileged, 2) white, and 3) little understand the black experience in America because, as privileged whites, they are strangers to invidious racism and bigotry.

Then too, the Winfield bill contains a suit saving proviso:

From a cost point of view, all these terms are juridical fig leafs. What action taken by a police officer is NOT willful? The term “wanton” is a term of art that may mean whatever prosecutors wish it to mean. And progressive legislators, Winfield among them, have already suggested that police departments in Connecticut – apparently all of them, since the bill touches all of them -- are riven with what has been called “systemic racism” arising from slavery. Winfield surely cannot believe that such inherent racism is NOT malevolent.

The animating feature of the effort to abolish partial immunity – thus leaving police departments and municipalities everywhere in the state at the mercy of costly litigation – is to abolish police departments by means other than those suggested by street agitators carrying signs that plainly say “defund police.” Litigation arising from the abolition of partial immunity will be costly whether or not aggrieved persons bringing suit prevail in courts of law. It may not be out of bounds to hazard a guess that partial immunity was instituted in the first place to prevent costly and disabling suits.

State Senator Daniel Champagne, also the Mayor of Vernon and a retired police sergeant, stressed these very points in the Senate debate on the revocation of partial immunity. Champagne regards the bill as being menacingly abstruse. In the absence of partial immunity, Champagne asks, can someone who has received a parking ticket sue police? Champagne does not ask whether such suits can be won in court; his question is – can such a suit be brought to court? “What about the officer who confronts an armed man, fires and mistakenly hits a bystander?” Champagne asked, “Would regional SWAT teams still be possible?”

As police recruitment falls away and “officers step back from fear of litigatory reprisals,” Champagne’s formulation, would serious calls to police departments continue to be answered in a timely fashion? Would convictions be overturned and set aside by courts if, say, a prisoner found guilty of domestic violence were to plead that an arresting white officer infected with residual Jim Crow had failed to follow the Witfield law?  And why are we assuming that the proper answer to a spike in crime statistics is a diminished and cowering police force?

There are signs that some woke journalists in Connecticut are beginning to explore the unorthodox legislative process that gave us the police reform bill. The House adjourned after passing the troubling Witfield provision, making it impossible for the Senate to amend the bill. Who coordinated that political ballet? If fact, the whole process of adoption contained so many moving parts so neatly arranged that any woke journalist, asked to believe that Swan Lake came together by happenstance, might be just a tad suspicious that the whole effort was carefully choreographed to produce a bill that seeks to solve a policing problem in, say, New Haven by imposing crippling restrictions on a police department in, say, Caanan, Connecticut, population  1,095, where Jim Crow laws had never gained a foothold.

Senator Cathy Osten of Sprague hit the right button when she said, answering generalized intimations of racism, “I don’t believe anybody around this [senate] circle is anti-police or racist. We need to work together. ... We have divided ourselves. We have made this a political thing, not a policy thing.‘'

Politics, which in corrupt states involves the use of crooked policies to retain power, has always been the worm in the policy apple.